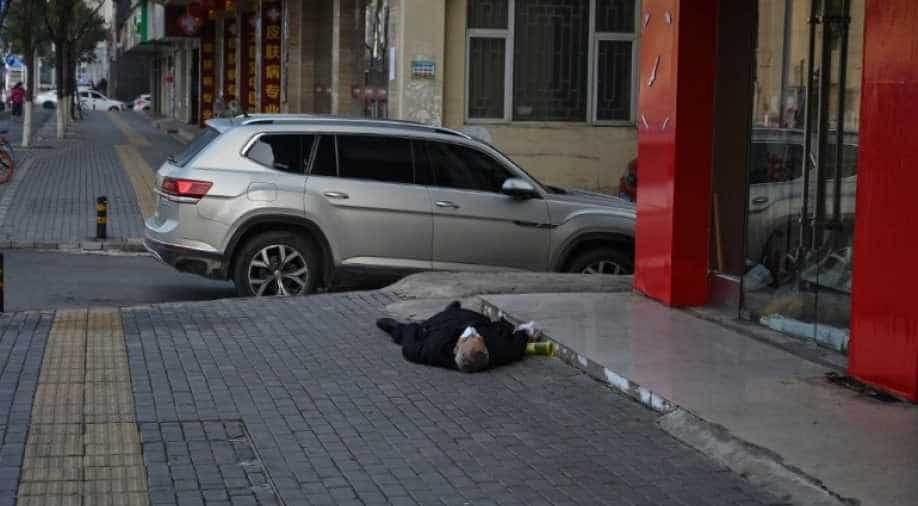 An old man's dead body lying on the streets of Wuhan Photograph:( AFP )

The fear of the deadly virus amongst a few passerby was apparent as they did not dare to touch the grey-haired man.

An elderly man was spotted lying dead on a pavement in China's Wuhan, the epicentre of coronavirus on Thursday.

The fear of the deadly virus amongst a few passerby was apparent as they did not dare to touch the grey-haired man.

News agency AFP's reporters detected the body in the morning and soon after an emergency vehicle arrived with police and medical staff.

So far, police and local health officials have not commented on the man who appeared to be in his 60s.

A woman who was standing near the old man said that she believed that the man had died from the virus.

"It's terrible," she said. "These days many people have died."

In two hours, at least 15 ambulances passed by from the scene.

Finally, a white van with blacked-out windows reached the spot and took away the man.

Wuhan is the epicentre of the deadly virus and alone witnessed 159 deaths out of the total toll of 213.

On Thursday, the World Health Organisation (WHO) declared the outbreak a global emergency.

Wuhan is put under an unprecedented lockdown, with roads out of the city blocked and flights suspended, in a bid to stop the virus from spreading.