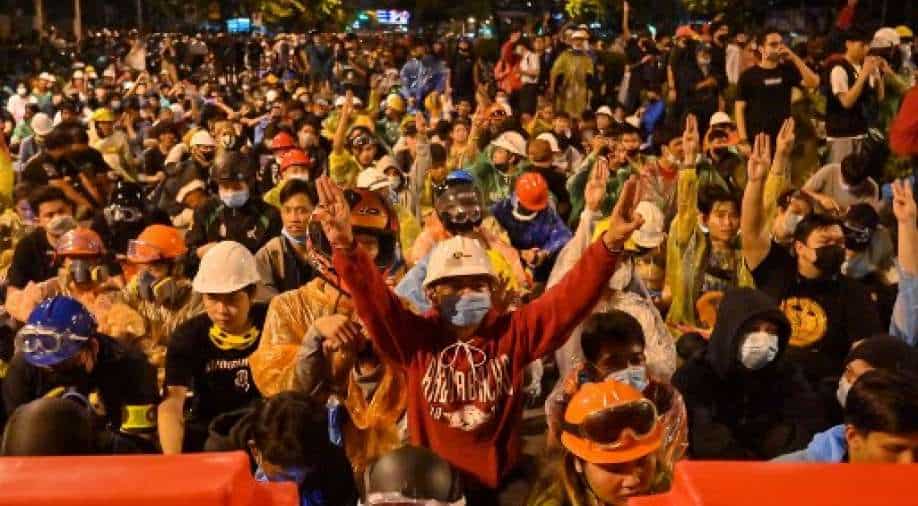 Protests that began in July against Prime Minister Prayuth Chan-ocha have increasingly turned to demands to curb the powers of King Maha Vajiralongkorn, breaking a longstanding taboo on criticising the monarchy

Thai police on Tuesday summoned seven leaders of anti-government protests to face charges of insulting the monarchy, a day before a planned demonstration to demand that the king give up control of the royal fortune, a police source and a rights group said.

It will be the first time such charges have been brought under so-called lese majeste laws relating to insults to the royal family in more than two years. Anyone found guilty faces up to 15 years in prison.

Protests that began in July against Prime Minister Prayuth Chan-ocha have increasingly turned to demands to curb the powers of King Maha Vajiralongkorn, breaking a longstanding taboo on criticising the monarchy.

One of the seven, Parit "Penguin" Chiwarak, said his family had received a summons for lese majeste in addition to other charges and he was not afraid.

"The ceiling has been broken. Nothing can contain us anymore," he wrote on Twitter. He told Reuters: "This will expose the brutality of the Thai feudal system to the world."

Others named included human rights lawyer Arnon Nampa, who became the first to call for royal reforms on Aug. 3, and Panusaya "Rung" Sithijirawattanakul, a student leader who set out 10 demands for royal reforms.

SUMMONS OVER EVENTS IN SEPTEMBER

The police source, who declined to be named because he was not authorised to speak to the media, said the protest leaders had until Nov. 30 to acknowledge the charges over comments made at protests on Sept. 19 and 20.

The summonses came a day before protesters have said they will march to the office that manages the royal fortune to demand that the king give up personal control of the assets.

Police said on Tuesday that no protesters would be allowed within 150 metres (450 feet) of the Crown Property Bureau, where royalists have also said they plan to gather in defence of a monarchy that faces its biggest challenge in decades.

"We will position ourselves at the police barriers," Bancha Panniwat, a leader of the Protect the Land of Siam royalist group, told reporters. "If there is any provocation, it will not be from us."

More than 50 people were hurt last week when police used water cannon and tear gas against thousands of protesters at parliament in the most violent day of more than four months of demonstrations.

Among protesters' demands is the reversal of changes that gave the king personal control over a royal fortune valued in the tens of billions of dollars.

The FreeYouth protest group said in a Twitter post that they would demonstrate on Wednesday to "reclaim the property that is meant to belong to the people".

The Royal Palace has made no comment since the protests began, although the king said the protesters were loved "all the same" when asked for comment on the demonstrations.

Prayuth has rejected protesters' calls to resign and said last week that all laws would be used against protesters who break them - raising the concern of activists that the royal insult laws would be among them.