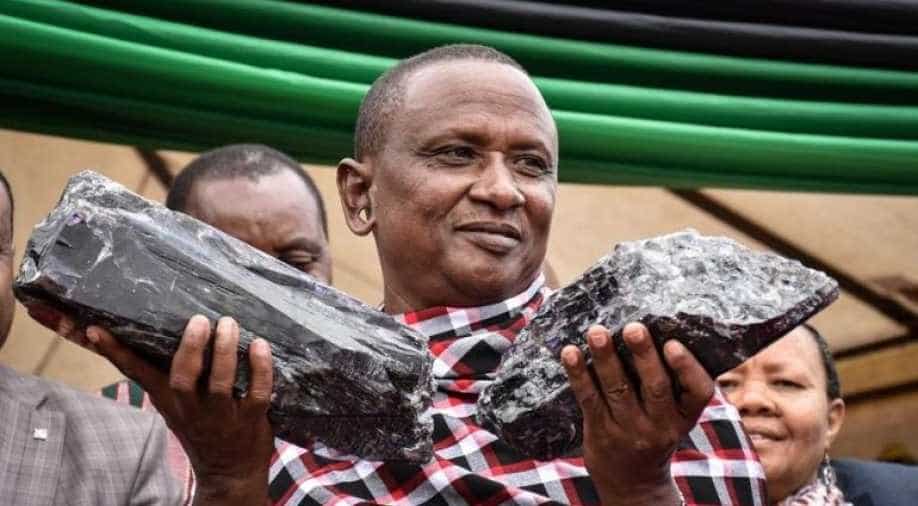 Tanzanian small-scale miner Saniniu Kuryan Laizer, 52, poses with two of the biggest of the country's precious gemstones, Tanzanite, as a millionaire during the ceremony for his historical discovery in Manyara, northern Tanzania, on June 24, 2020 Photograph:( AFP )

A miner who had become a millionaire overnight in June just inducted more money into his wallet. Talk about a double victory!

In June, the miner had sold two rough Tanzanite stones valued at $3.4 million. The one he sold recently is valued at $2 million.

Tanzanite cannot be found elsewhere in the world, and is one of the rarest gemstones on Earth.

Geologists believe that it may disappear over the next 20 years.

The rarer it is, the higher it will be prized. Essentially, its price depends on how rare it is and how clearly the colour is visible.

Lazier, while referring to his newly found riches urged small-scale miners to work in tandem with the government, claiming it was a good experience for him.

"Selling to the government means there are no shortcuts... they are transparent," he said in a mine in northern Mirerani.

In June, Lazier had sold two stones weighing 9.2 kgs and 5.8 kgs respectively. The man, who has 30 children promised to hold a party in the aftermath of receiving money. Tanzanian small-scale miner Saniniu Kuryan Laizer, 52, poses with the enlarged cheque copy from the government after selling two of the biggest of the country's precious gemstones, Tanzanite, during the ceremony for his historical discovery in Manyara, northern Tanzania, on June 24, 2020. Laizer found the stones weighing 9.27 and 5.1 kilogrammes respectively in the northern Mirerani hills, an area which President John Magufuli had fenced off in 2018 to stop smuggling of the gem. He sold them to the government for 7.7 billion Tanzanian shillings (nearly $3.3 million/2.9 million euros). The broken biggest record of Tanzanite was 3.5 kilogrammes. | AFP

Hard to be a miner

Miners in the region face a lot of setbacks from underemployment, low payments, or irregular payments.

Lazier on Monday claimed that he would use the money to build a school and a hospital in Simanjiro district which falls in the region of northern Manyara.

In conversation with the BBC, Lazier claimed that he would not let his changed fortune change him or his lifestyle.

He intends to continue taking care of his 2,000 cows, while adding how he sees no reason to take extra precautions simply because he had more money.

Miners like Lazier seek government licenses to hunt Tanzanite. But illegal mining is prevalent in the country, especially around mines that are owned by big corporations.

President Magufuli had ordered the military to set up a 24 kilometre long perimeter wall around a mining site in Manyara, which is believed to have the world’s only source of Tanzanite.

Owing to this wall, the government reported increase in the revenue, attributing it to the wall’s construction.