Talks open between Taliban, Afghan govt with calls for - but no signs of - ceasefire 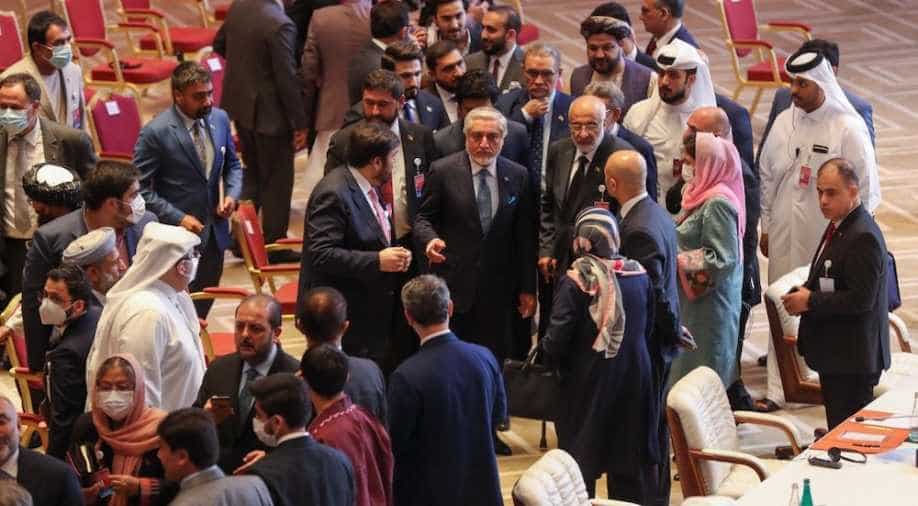 The opening ceremony came one day after the 19th anniversary of the 9/11 attacks on the United States that triggered its military involvement in Afghanistan. US President Donald Trump, up for re-election in November, has pushed hard to end the United States' longest war.

Historic peace talks between the Taliban and the Afghan government opened in Qatar on Saturday -- aimed at ending two decades of war that has killed tens of thousands of combatants and civilians. But no signs of ceasefire were seen as 18 provinces across Afghanistan saw widespread fighting between the Afghan security forces and the Taliban.

The Afghan Ministry of Defense (MoD) on Saturday said the Taliban staged attacks on Afghan security forces in 18 provinces since last night. The majority of the attacks were reported in Balkh, Jawzjan, Faryab, Ghor, Badghis, Herat, Ghazni and Uruzgan provinces.

"A large IED planted by Taliban on public road to kill innocent civilians in Paghman district of Kabul province, was discovered and safely detonated by #ANA, today," the MoD posted on Twitter on Saturday.

A large IED planted by Taliban on public road to kill innocent civilians in Paghman district of Kabul province, was discovered and safely detonated by #ANA, today. pic.twitter.com/webFxqVi9C

On the contrary, however, the Taliban in a statement said that as part of a goodwill gesture, the group on Saturday released 22 Afghan soldiers in Helmand province.

Meanwhile, in the Afghan capital, residents were glued to their televisions as the opening ceremony unfolded.

The opening ceremony came one day after the 19th anniversary of the 9/11 attacks on the United States that triggered its military involvement in Afghanistan. US President Donald Trump, up for re-election in November, has pushed hard to end the United States' longest war.

The occasion was heralded as a "truly momentous" breakthrough in nearly two decades of relentless conflict by US Secretary of State Mike Pompeo.

"We will undoubtedly encounter many challenges in the talks over the coming days, weeks and months," Pompeo said as he called for the warring sides to "seize this opportunity" to secure peace.

"Remember you are acting not only for this generation of Afghans but for future generations as well, your children and your grandchildren."

Also read | We have to stop violence and agree on humanitarian ceasefire: Afghan government to Taliban during intra-Afghan talks

Nineteen years since the US-led invasion that toppled the Taliban, Afghanistan's war is still killing dozens of people daily.

Further talks are expected to be arduous and complex, delegates acknowledged at the opening ceremony in Doha, and are starting even as deadly violence continues to grip Afghanistan.

To this end, Abdullah Abdullah, who is heading the peace process for Kabul, said 12,000 civilians have been killed and another 15,000 wounded just since the US signed a withdrawal agreement with the Taliban on February 29.

Abdullah called for an immediate, humanitarian ceasefire -- but his plea went unanswered by Taliban co-founder Mullah Abdul Ghani Baradar, who made no mention of a truce in his opening remarks.

The Taliban have long worried that reducing violence could lessen their leverage.

Instead, Baradar repeated the insurgents' message that Afghanistan should be run according to Islamic law, highlighting what likely will be the main sticking point in negotiations.

The Taliban wants to reshape Afghanistan as an Islamic "emirate", while the adminstration of President Ashraf Ghani wants to maintain the Western-backed status quo of a constitutional republic that has enshrined many rights, including greater freedoms for women.

Meanwhile, Norwegian Foreign Minister Ine Eriksen Soreide urged all sides to include "women, victims and minorities and other stakeholders" in the process, saying such inclusivity is the key to an enduring accord.

"The Afghan people must be at the heart of this peace process...that leaves no one behind, including women," said Indonesian Foreign Minister Retno Marsudi.

Pompeo noted the four women negotiators among the Afghan delegation, saying they exemplified the gains in Afghanistan of female participation in public life. He urged that the country's social advances be protected.

Habiba Sarabi, one of the women negotiators, said the talks' opening had been "very positive".

Officials, diplomats and analysts say that although getting both sides to the negotiating table was a major achievement, this does not mean the path to peace will be easy, especially with violence increasing around the country.

Zalmay Khalilzad, the US envoy who led talks with the Taliban, said the timetable for foreign troops to quit Afghanistan by May remained on track, and that he wanted a comprehensive ceasefire before then. Khalilzad cautioned that Washington would not underwrite a future Afghan state that was not in line with "universal values", including women's rights.

The US-backed negotiations come six months later than planned owing to disagreements over a controversial prisoner swap agreed in February.

Then-president George W Bush sent US forces into Afghanistan a month after the 9/11 attacks to hunt down their mastermind, Osama bin Laden, a Saudi given sanctuary by the country's Islamist Taliban rulers.

Although the Taliban regime was quickly toppled, they regrouped and have since waged an insurgency that has sucked in Afghanistan`s neighbours and troops from dozens of countries, including NATO forces.

Negotiations to broker a comprehensive peace deal were a component of a troop withdrawal pact signed between the United States and the Taliban in February. After months of delay, a dispute over the Taliban`s demand for the release of 5,000 prisoners was resolved this week.

Ahead of the US presidential election in November where he lags in the polls, Trump is looking to show progress on his pledge to end America's involvement in Afghanistan.

A comprehensive peace deal could take years, and will depend on the willingness of both sides to tailor their competing visions.

The talks are being held in a luxury hotel in Doha, where chairs were dotted at socially distanced intervals facing a banner emblazoned with the words "Afghan Peace Negotiations" in four languages.

Doha also hosted the signing of the US-Taliban deal in February that paved the way for peace talks.

The Taliban claimed "victory" after the deal and see their bargaining position as stronger now than at any time in the last two decades.

A who's who of international stakeholders in the Afghanistan conflict spoke at the opening ceremony, including UN Secretary-General Antonio Guterres and NATO chief Jens Stoltenberg. Iranian Foreign Minister Javad Zarif had been scheduled to speak but did not.