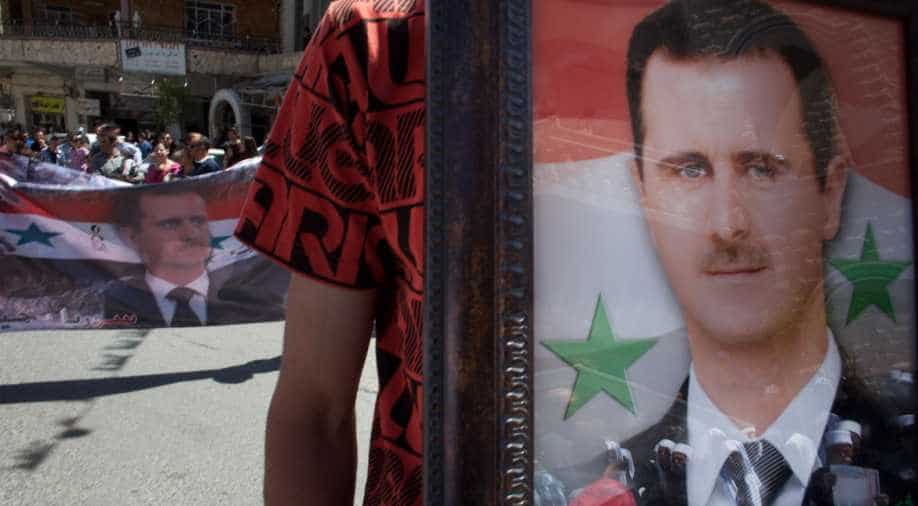 A portrait of Syria's President Bashar al-Assad in a demonstration in Israel. Photograph:( Getty )

"We are ready to negotiate about everything," said Syrian President Bashar Al Assad referring to the proposed peace talks in Kazakhstan between his government and the many rebel groups active in the country.

It is still unclear when the peace talk will be held and who will sit around the table to negotiate. The decision to held such meeting came shortly after the so called rebels suffered their final defeat in eastern Aleppo.

The peace talks have been pushed forward due to continued accuations of ceasfire violations between the parts.

The anti-Assad "Free Syrian Army" earlier this month said they had frozen any talks due to violations of the ceasefire, chiefly in the city of Wadi Barada near Damascus.

The Syrian army backed by its Lebanese ally Hezbollah has been trying to recapture the Wadi Barada valley where Syria's capital main water source is located.

According to Assad, the area was held by Jabhat Fateh al-Sham, formerly known as the al Qaeda-linked Nusra Front,  a jihadist group not covered by the ceasefire. "The terrorists occupy the main water source for Damascus, denying more than 5 million civilians water for more than three weeks," he said. "The Syrian army's role is to liberate that area,"

Assad said that any discussion of "Syrian issues" must be held between Syrian groups and he pointed out that many of the rebel brigades are funded by foreign powers, specifically Saudi Arabia, France and Britain. He pointed out that the main Syrian opposition umbrella group, the High Negotiations Committee, is backed by Riyadh.

"Who will be there from the other side? We do not yet know. Will it be a real Syrian opposition?", he asked provocatively.

Referring to the campaigning to retake the city of Raqqa, the de facto capital city of the Islamic State, President Assad said that it is his country's duty to defeat the terrorist organisation.

Currently a numerous militia made of Arabs and Kurds, the Syrian Democratic Force (SDF) is fighting to clean and secure the many villages surrounding the city. The People's Protection Unit (YPG) are the backbone of these forces and have claimed many times to be willing to retain the territories they liberated and fund an autonomous democratic and self-ruled region.

Assad's project is clear though, "every inch" of Syrian land and all Syria should be under state authority.