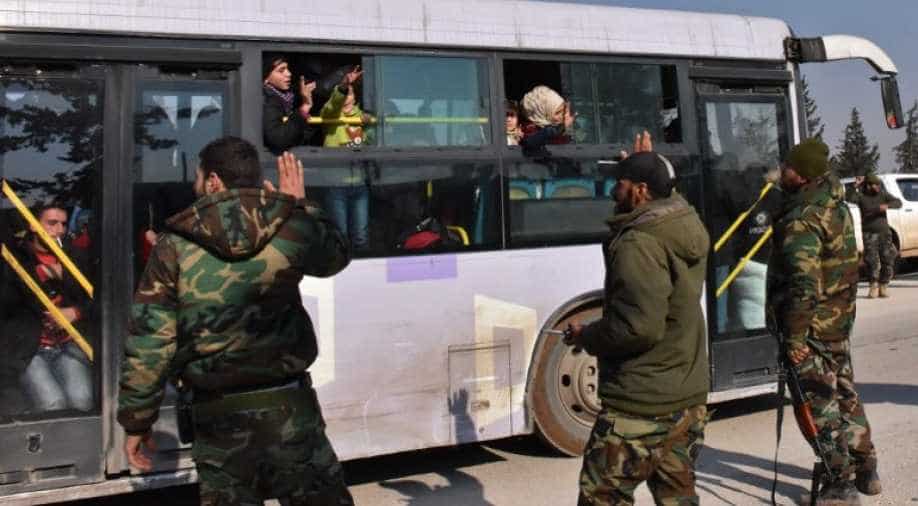 At least 25,000 people have left rebel districts of east Aleppo since the operation began last week, according to the International Committee of the Red Cross, which is overseeing the operation. Photograph:( AFP )

Syria's army on Tuesday urged the last remaining rebels and civilians to leave the besieged opposition enclave in Aleppo as it prepares to take full control of the devastated city.

The evacuation of Aleppo's rebel sector is seen as a pivotal moment in the nearly-six-year war that has killed more than 310,000 people and triggered a major humanitarian and refugee crisis.

In east Aleppo on Tuesday, soldiers using megaphones called on the remaining fighters and civilians to exit the opposition districts, a military source said

They also backed expanding a ceasefire, according to Lavrov, who said the evacuation of east Aleppo should finish within "one or two days".

At least 25,000 people have left rebel districts of east Aleppo since the operation began last week, according to the International Committee of the Red Cross, which is overseeing the operation.

Thousands more were still waiting to be bused out, spokeswoman Ingy Sedky said.

She said that 750 people had been evacuated in parallel from Fuaa and Kafraya, two Shiite-majority villages in north-west Syria besieged by rebels, as part of the deal.

In east Aleppo on Tuesday, soldiers using megaphones called on the remaining fighters and civilians to exit the opposition districts, a military source told AFP.

"The army is expected to enter (Aleppo) to clean the area after the fighters leave," the source said.

Buses and ambulances have been bringing rebels and civilians on a tense journey from Aleppo's battered east into government-held neighbourhoods, and back into rebel-held territory west of the city.

Thousands of people -- mostly women and children -- squeezed onto buses with whatever belongings they could carry, many in tears and others shivering in the cold, according to AFP correspondents who made the trip.

"Everyone was so cold," Bashar Babbour, who works with the medical charity UOSSM, told AFP from the staging ground of Khan al-Assal.

He said he saw a shivering old man struggling to get off one of the buses.

"When people are going to the medical assessment teams, most of them ask for food and water, in addition to blankets, especially if they're arriving at night," Babbour said.

He said many other evacuees were also asking if there was internet access there so they could contact friends or relatives.

In an area nearby, an AFP correspondent saw hundreds of people aboard eight buses that came from Fuaa and Kafraya.

A rebel fighter who did not want to be named said the buses would be allowed to continue on to regime-controlled territory in Aleppo once a new convoy of evacuees left the city's rebel enclave.

The World Health Organization said the Aleppo evacuees included around 300 needing medical treatment, among them dozens of children.

"The huge majority of these patients have trauma injuries," spokesman Tarik Jasarevic said, adding that 93 people in critical condition had been referred to hospitals in Turkey.

Aleppo was once Syria's commercial and industrial hub, but it has been divided since 2012 between government forces in the west and rebel control in the east.

Government forces launched an offensive in mid-November to capture the whole city and had seized more than 90 percent of the eastern half when the evacuation deal was struck.

In a regime-held neighbourhood on the southern edges of Aleppo, an AFP correspondent saw Syrian troops strolling through the area on Tuesday while others gathered around burning tyres to stay warm.

"I hope today is the last day of rebels leaving because we've been promised we can go on vacation and rest if the operation ends today," said Akram, a soldier.

Diplomatic efforts -- including several rounds of peace talks in Geneva -- have failed to make progress in resolving the conflict, which reached a turning point last year when Russia launched an air war in support of Assad.

In a rare show of international unity, the UN Security Council on Monday unanimously adopted a French-drafted resolution with the backing of Russia to monitor the evacuations from Aleppo.

In a boost to the troubled peace process, the foreign ministers of Russia, Iran and Turkey agreed Tuesday on "the importance of widening the ceasefire, of free access for humanitarian aid and movement of civilians onto Syrian territories".

Turkish President Recep Tayyip Erdogan meanwhile said he had agreed with Russian counterpart Vladimir Putin in a phone call that the assassination of Moscow's ambassador in Ankara on Monday would not harm cooperation including on Syria.