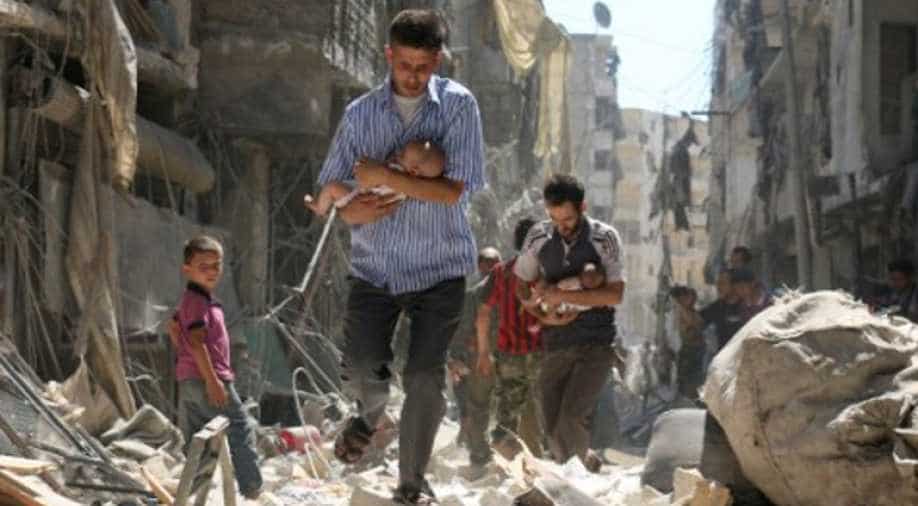 Syrian men carrying babies make their way through the rubble of destroyed buildings following a reported air strike on the rebel-held Salihin neighbourhood of the northern city of Aleppo, Photograph:( AFP )

Russian air strikes in the Aleppo, Syria, region have killed some 1,207 civilians, 380 of them children, the Syrian White Helmets civil defence group told United Nations war crimes investigators in a letter seen by Reuters on Thursday.

The White Helmets, the Syrian Network for Human Rights, Independent Doctors Association and the Violations Documentation Center outlined their accusations against Russia in a 39-page document submitted to the UN Commission of Inquiry on Syria.

The document lists some 304 alleged attacks carried out primarily between July and December in the Aleppo region in which the groups say there is a "high likelihood" of Russia responsibility.

The Russian UN mission was not immediately available to comment on the allegations. Russia, which had been backing a military offensive by Syrian government troops in the city of Aleppo, has said it stopped air strikes there in mid-October.

"Evidence clearly indicates that Russia has committed or been complicit in war crimes in Syria," the White Helmets letter to the UN inquiry said.

The document said the accusations were based on witness testimony and corroborating evidence, which includes video footage identifying the aircraft responsible for attacks, audio intercepted from aircraft cockpits and the munitions used.

Thousands of people were evacuated on Thursday from the last rebel bastion in Aleppo, the first to leave under a ceasefire deal that would end years of fighting for the city and mark a major victory for Syrian President Bashar al-Assad.

In October, the UN Human Rights Council asked the UN commission of inquiry on Syria, led by Paulo Pinheiro, to identify the perpetrators of war crimes in the city of Aleppo.

The UN high commissioner for human rights, Zeid Ra'ad al-Hussein, said in October that air strikes in the city of Aleppo's rebel-held east by government forces and allies were responsible for the overwhelming majority of civilian casualties.