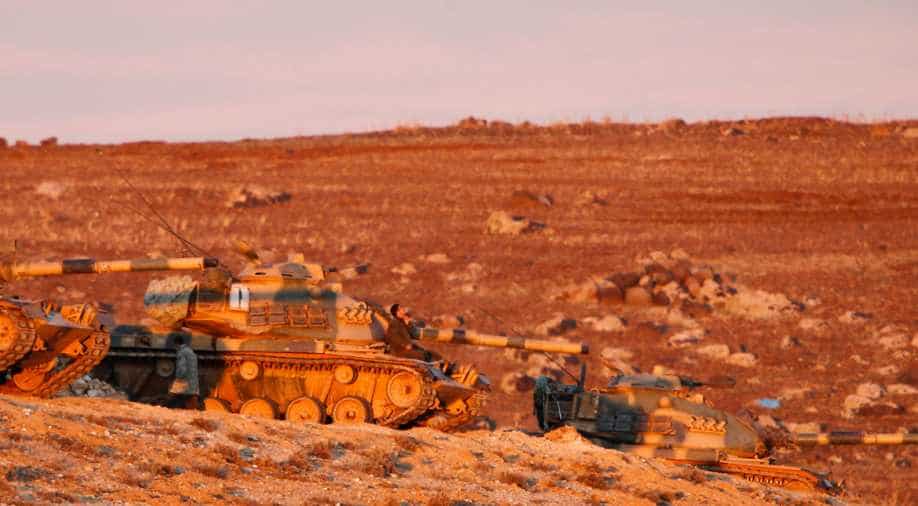 More than 250,000 civilians have been besieged in eastern Aleppo since July, with food and fuel supplies dwindling and international aid exhausted. (Representative image) Photograph:( Getty )

Syrian army units advanced in Aleppo on Friday and pounded rebel-held eastern neighbourhoods with air strikes and shelling, causing new deaths among besieged civilians and adding to their despair.

The US military, meanwhile, announced its first combat loss in Syria, saying a service member had been killed by a bomb during an offensive against the Islamic State group.

Ten days into the offensive to recapture all of Syria's battered second city, regime bombardment has killed 196 civilians, including at least 27 children, in east Aleppo, a monitoring group said.

Clashes also rocked Masaken Hanano, east Aleppo's largest district, more than 60 per cent of which is now under the control of regime forces, the monitor added.

State television said the army was advancing into Masaken Hanano "from three axes", calling it the "largest front" in the battle for Aleppo, the capture of which could deal a decisive blow to rebels.

More than 250,000 civilians have been besieged in eastern Aleppo since July, with food and fuel supplies dwindling and international aid exhausted.

The Observatory said four children fled Friday to Sheikh Maqsud, a Kurdish-controlled enclave between the government-held west of Aleppo and the east.

But rebels prevented "dozens of families" from Bustan al-Basha from leaving, it said.

And regime raids on two villages west of Aleppo killed at least 15 civilians on Friday, four of them children, said the Observatory.

Damascus says east Aleppo residents and surrendering fighters are free to leave but accuses the rebels of using civilians as "human shields".

Residents endured a brutal night Thursday of bombardment during which 32 civilians, including five children, were killed.

"I'm terrified by the army's advance and the increasing bombardment," said Abu Raed, a father-of-four from the Fardos neighbourhood.

"There's no safe place for me and my family."

Rescue workers in several parts of the east battled to extricate civilians trapped under the rubble of bombed buildings.

In Bab al-Nayrab, an AFP cameraman saw them struggle for more than an hour to pull out a boy who was stuck from the waist down in the rubble, with the back of his head badly gashed.

"There's no work, there's no food, and the bombing is incessant... I want to get out of here by any means possible."

Resident Abu Hussein added: "I don't know what the UN is waiting for. Why don't they at least evacuate the children and women?"

Retaliatory rocket fire by the rebels has killed at least 18 civilians in the government-held west, 10 of them children, since the regime assault began on November 15, said the Observatory.

The UN says it has a plan to deliver aid to Aleppo and evacuate the sick and wounded, which rebel factions have approved.

But Damascus has yet to agree, and additional guarantees are needed from regime ally Moscow, UN officials say.

On Thursday, the head of the UN-backed humanitarian taskforce for Syria, Jan Egeland, warned there was no plan B to help civilians in east Aleppo.

"In many ways plan B is that people starve, and can we allow that to happen? No we cannot," he said.

Further east, in Raqa province, where a US-backed alliance of Kurdish and Arab fighters is battling IS, Washington suffered its first combat loss in Syria, the coalition announced.

It said the service member died on Thursday from wounds caused by an improvised bomb near the town of Ain Issa.

US special forces are on the ground in the area supporting an offensive to retake the city of Raqa, the jihadists' de facto Syrian capital.

Also on Friday an air strike carried out by an unidentified aircraft hit a small maternity hospital in the north of Idlib province, killing a civilian and putting the clinic out of service, said the Observatory.

Rebel-held areas in the Eastern Ghouta near Damascus were also pounded by regime forces on Friday, the monitor said, killing at least two civilians and wounding 15 in the town of Douma.

The charity Doctors Without Borders (MSF) reported "multiple air strikes" on Eastern Ghouta, adding that the number of the wounded "is still being counted."

At least 49 civilians have been killed in regime bombardment on the rebel stronghold since November 17, almost half of them children, said the Observatory.