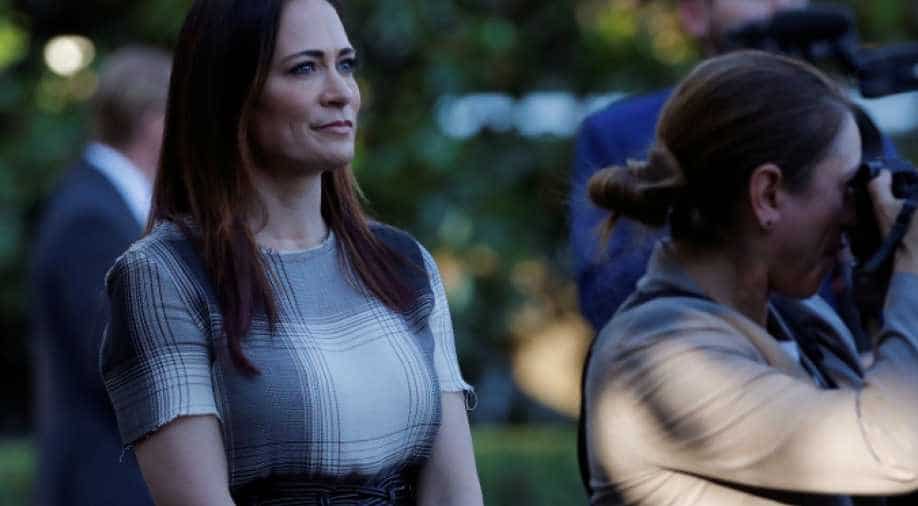 Grisham, 42, a fixture in the Arizona Republican Party, was one of Trump's first hires for his presidential campaign

Melania Trump announced the development in a tweet to close out the president's search for a press secretary after Sanders decided to resign and go back home to Arkansas earlier this month.

Grisham, 42, a fixture in the Arizona Republican Party, was one of Trump's first hires for his presidential campaign - as a press aide in 2015. She served as a deputy press secretary in the White House when he took office in January 2017 and eventually moved over to the first lady's operation.

A clue that the president was leaning toward Grisham for the job was when aides said she had now been added to the White House team going with Trump to the G20 summit in Osaka, Japan, this week.

"I am pleased to announce @StephGrisham45 will be the next @PressSec & Comms Director!" Melania Trump wrote.

I am pleased to announce @StephGrisham45 will be the next @PressSec & Comms Director! She has been with us since 2015 - @potus & I can think of no better person to serve the Administration & our country. Excited to have Stephanie working for both sides of the @WhiteHouse. #BeBest

"She has been with us since 2015 - @POTUS & I can think of no better person to serve the Administration & our country."

The fact that Mrs Trump announced the appointment, instead of the president himself, showed that the first lady was willing to part with Grisham for the greater good.

Grisham was viewed internally as the candidate with the best rapport with President Trump, a key requirement.

With his tweets and multiple exchanges with reporters, Trump is in many ways his own press secretary and communications director, and Sanders' role grew to being a senior adviser.

Whether Grisham would bring back the daily press briefing was unclear. Trump has all but ended the practice and it has been more than three months since the last one.

The other top candidate had been Sanders' principal deputy press secretary, Hogan Gidley.

Tony Sayegh, a former Treasury Department spokesman, had been considered as well but was in the midst of a move home to New York. Former State Department spokeswoman Heather Nauert withdrew herself from consideration.

Gidley tweeted his congratulations to Grisham.

"Amazing announcement! So proud and blessed to have my good friend @StephGrisham45 working with our team. She is a rockstar and perfect to fill Sarah’s shoes!" he said.

Sanders is contemplating a political future in Arkansas, considering a 2022 run for state governor, a position once held by her father, Republican Mike Huckabee.