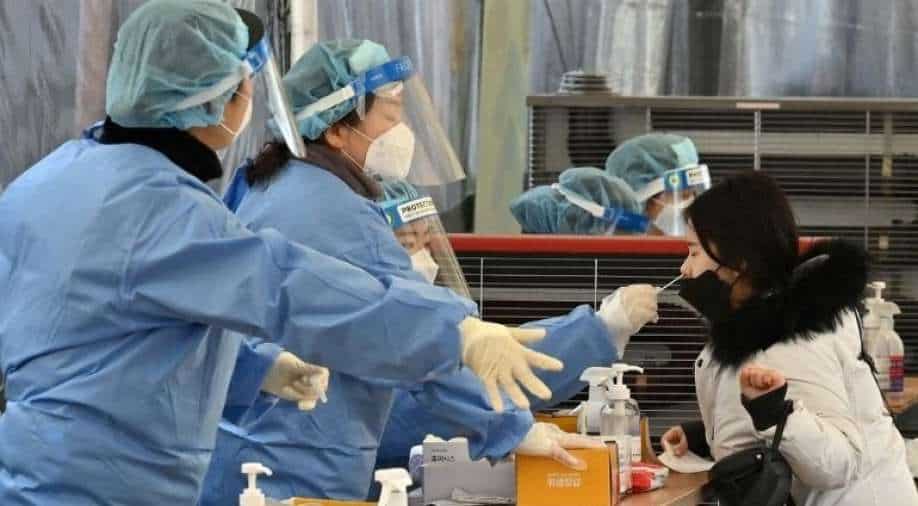 A medical staff member takes a nasal swab from a visitor (C) to test for the Covid-19 coronavirus at a virus testing centre in Seoul Photograph:( AFP )

The daily number of new cases hit a record high of 49,567 for Tuesday, according to the Korea Disease Control and Prevention Agency (KDCA)

South Korea on Wednesday dropped the "trace, test and treat" programme amid a surge in Omicron cases.

Senior health official Sohn Young-rae said the "trace, test and treat" approach is "difficult to operate due to limited resources" and has "excessively high social and economic costs."

The daily number of new cases hit a record high of 49,567 for Tuesday, according to the Korea Disease Control and Prevention Agency (KDCA).

The daily tally has more than doubled in less than a week, and could reach up to 170,000 later this month, the KDCA said.

A new set of measures to manage the virus is taking effect in stages starting this month, and will refocus resources on the most vulnerable, health officials said.

The aim is to diagnose and treat high-risk groups to "prevent the collapse of the medical system and the deterioration of social and economic functions", Sohn added.

Authorities will be prioritising tests for people aged 60 or older.

Previously, anyone testing positive was sent to a government centre for treatment and quarantine, but now asymptomatic patients are being told to stay at home.

Nearly 96 per cent of South Korean adults have been fully vaccinated and some 64% have received a booster shot.

The country's government shifted its testing and tracing policy in the face of the Omicron spread in favour of self-monitoring and diagnosis and at-home treatment starting last week.

At least through Feb. 20, officials will restrict any private social gatherings between those who are fully vaccinated to six people, while requiring unvaccinated people to eat or drink alone at restaurants and coffee shops. Public indoor dining is banned after 9 p.m.

Proof of vaccination or a recent negative test is also required to enter potentially crowded venues such as restaurants, nightclubs, karaoke rooms and gyms.

Announcing the decision at a government meeting, Prime Minister Kim Boo-kyum cited the “inexorable” virus spread driven by the highly contagious omicron variant, even as he acknowledged the public’s fatigue with pandemic restrictions.

The expanded use of rapid antigen test kits, which experts say can fail to detect the omicron variant, has raised concerns that infected people may also continue to venture out in public, after getting a false negative test.