Six in White House, including Trump’s chief of staff, have the coronavirus 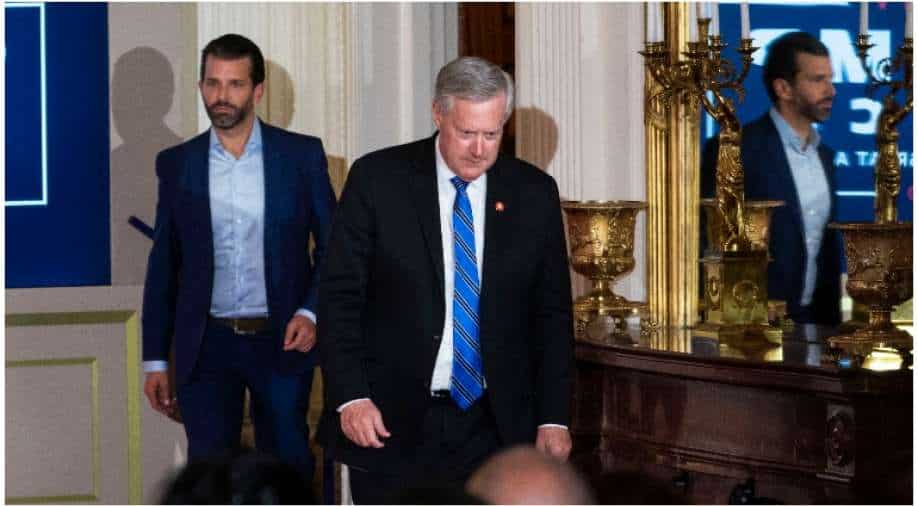 Five other White House officials also tested positive for the virus in the days before and after Election Day, people familiar with the diagnoses told The New York Times. Bloomberg News also reported on additional cases around the president, who contracted the virus last month and spent three days in the hospital receiving experimental treatments

Six White House aides and a Trump campaign adviser — including Mark Meadows, President Donald Trump’s chief of staff — have contracted the coronavirus, officials said, raising fears of another outbreak sweeping through the ranks of the nation’s top officials as cases surge to record levels in the country.

Meadows, who routinely shrugged off the need to wear masks and embraced Trump’s strategy of playing down the threat from the coronavirus over the summer, informed a small group of White House advisers that he had tested positive for the virus Wednesday, a senior administration official said Friday.

Five other White House officials also tested positive for the virus in the days before and after Election Day, people familiar with the diagnoses told The New York Times. Bloomberg News also reported on additional cases around the president, who contracted the virus last month and spent three days in the hospital receiving experimental treatments.

Nick Trainer, who worked on the president’s campaign, has also tested positive for the coronavirus, a person briefed on his diagnosis said.

The new wave of infections rattled and angered members of the White House staff even as they struggled to come to grips with Trump’s likely loss in the presidential race. News of the infections emerged despite warnings to keep quiet about the new cases, according to two White House officials who spoke on the condition of anonymity to publicly discuss internal conversations.

A few weeks ago, Meadows sought to keep an outbreak in Vice President Mike Pence’s office from becoming public.

Public health experts said the infections of Meadows and the others at the White House underscored the importance of taking numerous steps to prevent the spread of the virus. Meadows and Trump have said repeatedly that they did not need to wear masks or maintain social distancing because they were frequently tested.

“It’s emblematic of the national failure to control COVID,” said Tom Frieden, who served as director of the Centers for Disease Control and Prevention under President Barack Obama. “It shows the fallacy of relying on testing alone. Testing doesn’t replace other safety measures. It’s just one tool among many.”

The new cases at the White House came as the pandemic rampaged across the United States, which has averaged more than 100,000 new cases per day over the past week and hit another record Friday, with more than 132,700 cases in a single day.

As of Saturday morning, more than 9,830,800 people in the United States had been infected with the coronavirus, and more than 236,500 had died.

Meadows is the latest in a string of people connected to the White House to contract the virus in the past seven weeks, including Trump and the first lady, Melania Trump, a half-dozen aides to the president and five aides to Pence, including his chief of staff, Marc Short. Several journalists who work at the White House were also infected. On Saturday, Rep. Matt Gaetz, R-Fla. and a close ally of Trump’s, disclosed that he had tested positive for virus antibodies Tuesday but said he did not know when he had contracted the virus.

At least one gathering at the White House — a celebration of Trump’s nomination of Judge Amy Coney Barrett to the Supreme Court on Sept. 26 — is suspected of being a “superspreader” event after more than a dozen aides, reporters and guests who were in attendance or came into contact with people who were there tested positive for the virus.

That event took place in the Rose Garden and inside the White House.

Frieden said it was possible the new cases, including Meadows’, may actually be part of the same outbreak from late September rather than a separate cluster of cases. That would suggest that the White House has not gotten control of the virus as it spreads through the West Wing.

“It may be the same cluster that has continued for well over a month,” Frieden said. “You’re not going to control it if you don’t try to control it.”

Trump has spent most of the year playing down the threat of the virus, and several White House officials, including Meadows, have encouraged him to treat the pandemic as a localized threat in Democratic-leaning states.

It is unclear how aggressive the White House intends to be in trying to track the contacts that Meadows and the other infected aides have had over the past several days. People who test positive are often infectious in the days leading up to the test, especially if they have symptoms of the disease.

Meadows, a former member of Congress, is a gregarious presence at the White House whose position requires him to interact with people throughout the West Wing and frequently takes him to the residential part of the White House to meet with the president.

On Tuesday night, Meadows was at Trump’s election party at the White House, which included several hundred people gathered in the East Room for several hours, many of them not wearing masks as they mingled while watching the election returns.

The president’s chief of staff was also in contact with a coterie of aides earlier in the day at the Trump campaign headquarters in Virginia, crammed into a tight space, where he was not wearing a mask as the president greeted campaign workers.

During the pandemic, Meadows has pushed for a focus on efforts to revive the economy and only sporadically wore a mask as he traveled with the president or attended some crowded events in the Oval Office.

Like Trump, Meadows often mocked reporters who wore masks around him, saying the face coverings muffled their voices. A video clip of Meadows refusing to give a statement to reporters at the Capitol because they asked him to wear his mask was widely shared across social media.

He has also been among the West Wing officials who have favored minimizing the public appearances of Dr. Anthony Fauci, the nation’s top infectious disease expert, who has issued far more dire warnings about the threat of the virus than Trump has wanted to have publicly declared.

In the waning days of the presidential campaign, Meadows made unwanted headlines when he acknowledged during a television interview that the government would not be able “control” the pandemic. Critics and Trump’s political rivals seized on the comment as evidence that the administration had given up on fighting the virus.

Meadows was one of few people fully briefed on Trump’s own bout of COVID-19, which the president announced Oct. 2. He was involved in coaxing a reluctant Trump to go voluntarily to Walter Reed National Military Medical Center at a time when the president was resisting such a move but his oxygen levels had dropped and he had a high fever.

But Meadows also had a starring role in an episode that enraged Trump the day after the president was flown to the hospital. After Trump’s doctor, Sean Conley, did not answer questions honestly about the president’s symptoms, Meadows approached a small group of reporters in the White House pool and gave a more candid assessment that the president was not quite out of the woods.

He gave it on the assumption he would not be identified, but a C-SPAN camera captured Meadows talking to the reporters. Trump was livid when he learned that Meadows had said something revealing about his medical condition.

A few weeks later, when Short and four other aides to Pence fell ill, The Times reported that Meadows had sought to keep the information secret.

People close to Meadows insisted he had merely wanted contact-tracing to take place before any information became public. But he all but confirmed in an interview with Tapper, who asked about The Times’ reporting, that he did not believe the White House should discuss the health of anyone other than the president or the vice president.

Meadows did not respond to a request for comment Friday night. A White House spokesman also declined to comment, citing a need to maintain privacy of personnel health matters.