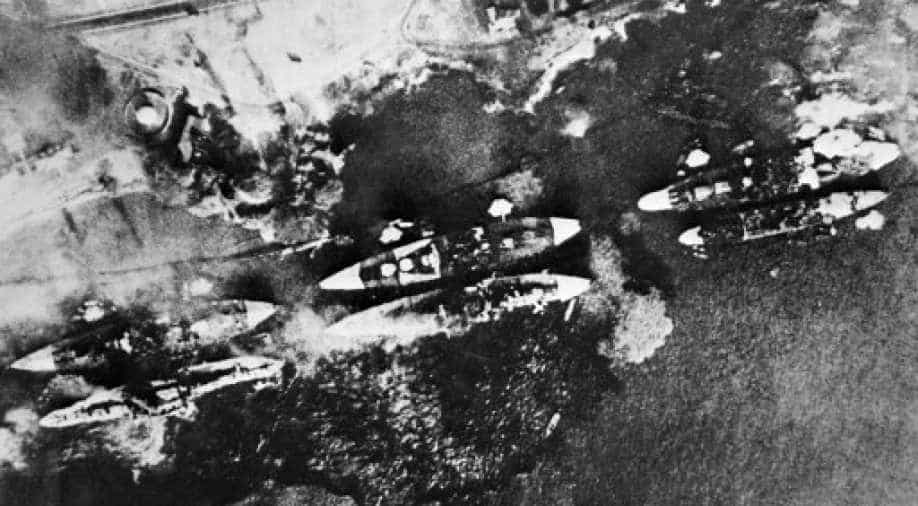 This December 7 file image shows an aerial view of battleships of the US Pacific Fleet consumed by the flames in its home base at Pearl Harbor in Hawa? after 360 Japanese warplanes made a massive surprise attack. Photograph:( AFP )

Prime Minister Shinzo Abe will become the first sitting Japanese leader to visit Pearl Harbor, as he announced on Monday a symbolic visit this month to the site of the Japanese attack 75 years ago that pulled the United States into World War II.

Abe said in a news conference that he would travel to the American naval base with outgoing US President Barack Obama during a trip to Hawaii on December 26 and 27, reports the New York Times.

By visiting Pearl Harbor, Abe will be reciprocating a trip President Obama made in May to the Japanese city of Hiroshima, where the United States dropped a nuclear bomb at the end of the war with Japan in 1945.

"We must never repeat the horror of war. I want to express that determination as we look to the future, and at the same time send a message about the value of US-Japanese reconciliation," said Abe.

Abe's visit will come just a few weeks after the 75th anniversary of the attack, which occurred on December 7, 1941.

Carried out by Japanese bombers and fighter planes launched from aircraft carriers that had quietly slipped within striking distance of Hawaii, the attack killed more than 2,000 Americans and sank a number of United States warships, including the battleship Arizona, whose wreck has become a memorial to the battle.

Obama's trip to Hiroshima this year was also a first by any sitting American president. In a statement, White House press secretary Josh Earnest said that the two leaders would visit the Arizona memorial together to honour those killed at Pearl Harbor.