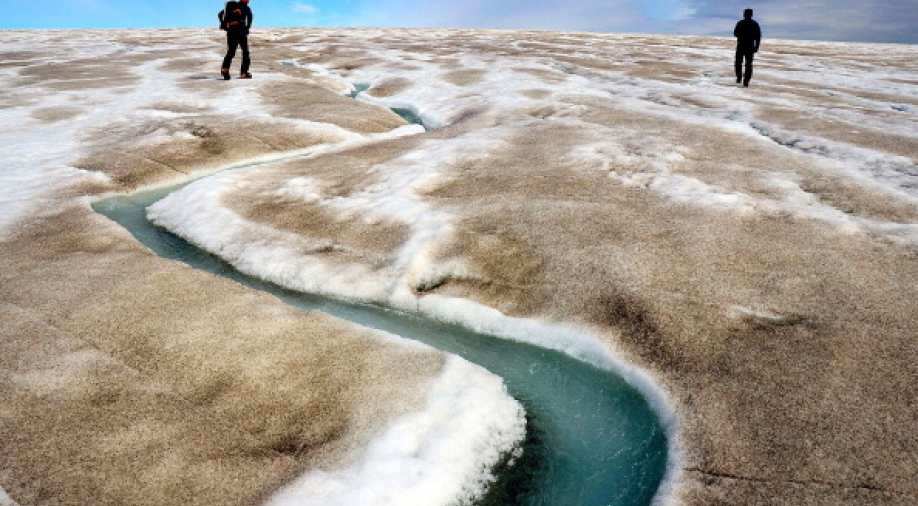 A stream made by the melting glacier. Photograph:( Getty )

The sea level is expected to rise more than previously estimated in 2100 due to accelerated global warming.

National Oceanic and Atmospheric Administration (NOAA) said the average sea level will be a half a metre more than earlier suggested by them.

The figure has been revised due to disappearing ice cover in Antarctica and Greenland.

"Recent (scientific) results regarding Antarctic ice sheet instability indicate that such outcomes may be more likely than previously thought," said the report, released on January 19.

The lower limit of the sea level rise also saw an increase. In the best case scenario, the sea level will rise by nearly one foot (0.3 metres), up from four inches (0.1 inches) as was previously estimated.

NASA also weighed in on the subject, saying unfettered burning of fossil fuels were causing global warming, which meant that the rise in sea level was "unavoidable".

But the big question remains: how soon? Researchers do not know how soon the seas will rise, and whether they will hit these levels in this century or beyond.

"We are not projecting anything. Everything is dependent on the amount of future heating, ocean and atmospheric heating," the lead author of the reprot, William Sweet, said.

Though experts warn that the past is not an accurate predictor of future sea level rise, global average sea level has climbed eight to nine inches since 1880, when modern record-keeping began.

Much of that has taken place in recent years, as global warming has accelerated. Seas around the world have risen an average of nearly three inches since 1992.

The NOAA report also pointed to regional dangers of sea level rise, with some portions of the US coast more likely to see above-average rise and increased flooding than other parts of the world.

Land in Alaska is rising, but in Louisiana and along the Gulf Coast and the mid-Atlantic, it is sinking.

Other factors, like changing ocean circulation in some parts of the planet, affect how much oceans mount in various places.

As ice sheets melts, the gravity around Earth will change as the planet loses mass, causing some areas to see higher or lower sea level rise than the global average.

Six feet would flood the homes of six million people in the United States.

Sweet said the report's release was not planned to coincide with the end of the Obama presidency, or to precede the inauguration of Donald Trump, who has expressed doubts about climate change and pledged to increase fossil fuel extraction in the United States.

"But no, this has actually been in the works for over a year."