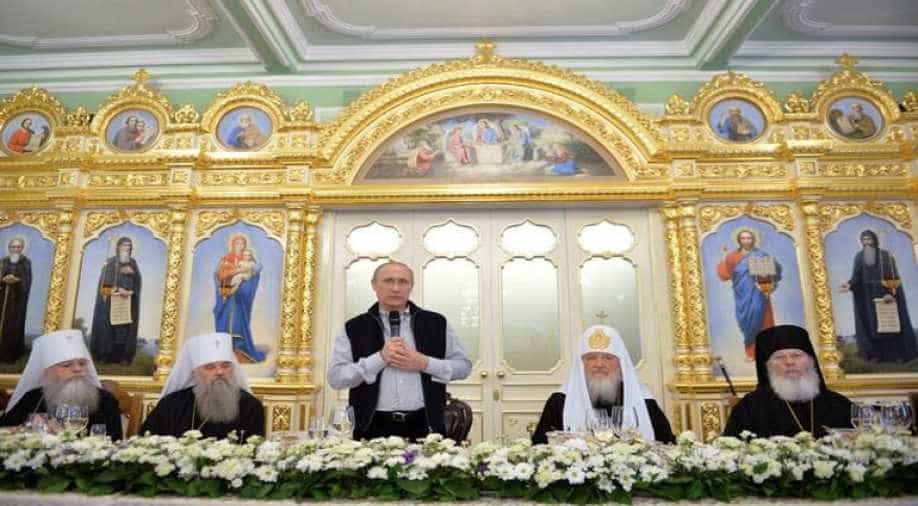 Russian President Vladimir Putin and Patriarch of Moscow and All Russia Kirill visit the Cathedral of the Transfiguration of the Savior at Valaam Monastery, Russia, July 11, 2016. Photograph:( Reuters )

Follow Us
Moscow offered to fly its jets over the Baltic region with their transponders engaged, an apparent concession to NATO powers who accuse Russia's air force of endangering aviation by turning off the devices that allow them to be detected by ground radar.

Moscow's envoy to NATO told alliance ambassadors that Russian pilots could turn on the cockpit transmitters, known as transponders, if alliance planes did the same.

"We are ready to fly with transponders along certain flight trajectories," Russia's ambassador Alexander Grushko said after the NATO-Russia Council, a forum bringing together Russia and the 28 NATO ambassadors.

"The aircraft of many countries do fly in the region with their transponders off," Grushko said.

NATO Secretary-General Jens Stoltenberg welcomed the proposal but said that all jets under NATO command already flew with their transponders on.

"Transponders are important, but they are only one element of a broader picture related to air safety. The basic thing is safe behaviour, to fly in a safe and professional way," Stoltenberg said.

The proposal comes after two years of several near misses between Western planes, both civilian and military, and Russian jets in the skies above the Baltics that NATO has patrolled since Russia's annexation of Crimea in 2014.

It also comes after several gestures by Russian President Vladimir Putin that seem to aim at defusing East-West tensions despite NATO's summit last weekend in Warsaw. There, the alliance agreed to deploy a multinational force to the Baltics and Poland and to take over a US-built missile shield that Russia sees as hostile.

Putin agreed to Wednesday's meeting of the NATO-Russia Council, only the second since mid-2014, while also recently allowing a UN resolution authorising the EU to intercept arms shipments to Libya in the Mediterranean. Putin has talked by telephone US President Barack Obama, German Chancellor Angela Merkel and French President Francois Holland in recent days.

"Back to the Cold War"

The transponders plan, which was raised by Putin during a visit to Finland this month, was put to NATO ambassadors both by Russia's envoy and generals at the meeting at NATO headquarters. Diplomats said there was no detailed discussion.

Diplomats told Reuters the Russian proposal appeared to be directed at US military reconnaissance flights that regularly fly through the region, and which Russia has intercepted in what Washington says is an unsafe manner.

In one instance in April, Russia sent a fighter plane to intercept a US aircraft approaching its border over the Baltic Sea, accusing the plane of turning off its transponders.

It was not immediately clear if US reconnaissance jets have flown with their transponders off in the region.

In a sign of the continued strains between Russia and the West, Grushko reiterated Moscow's position that NATO's biggest modernisation since the end of the Cold War is putting Europe's security at risk. NATO denies that, saying its military build-up is a proportionate response to Russia's actions in Ukraine.

"The message was very clear. There is no reason for NATO to do what it is doing. The direction in which NATO is moving in military terms is very worrisome," Grushko said. "It takes us back to the Cold War," he said.