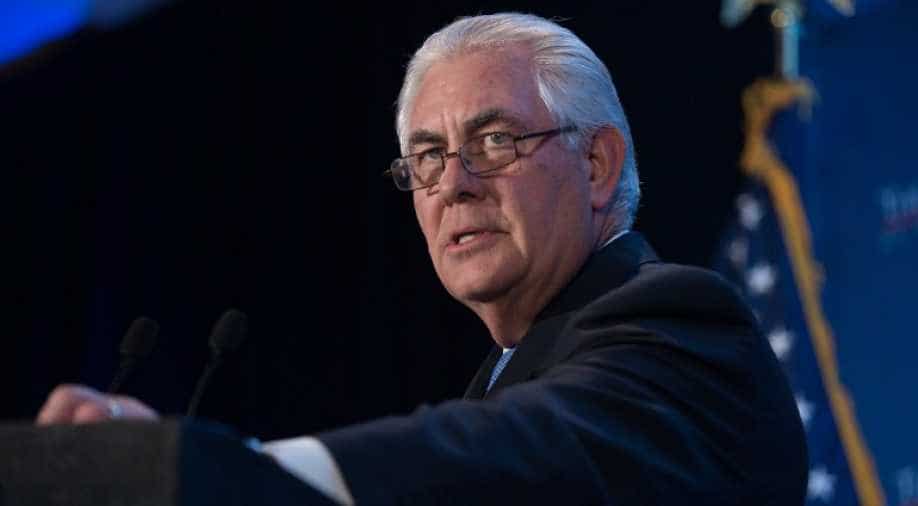 Secretary of State-designate Rex Tillerson has agreed to sever all ties with ExxonMobil, putting deferred stock awards in an independently managed trust, the company he headed until last week said.

The agreement was reached in consultation with federal ethics regulators to comply with conflict of interest requirements, it said in a statement late Tuesday.

It is not immediately clear why Tillerson is required to formally sever all ties with his private business, while president-elect Donald Trump is aparently free not to. Trump has so far refused to sever his private business interests while serving in public office, saying via Twitter that instead he will give control of his business interests to his children, who are currently sitting in on official meetings with world leaders and are playing an active role on his transition team.

Trump was the first US presidential candidate in 40 years to conceal his tax return from the public. He pledged to release them, but said he was forbidden because his taxes were under audit by the IRS, who responded by saying that he was indeed under audit but was free to release them to the public. Then Trump pledged to release them if he won, and has so far still refused. His son, Donald Trump Jr, stated that his father didn't publicly release his tax returns because they were 12,000 pages it would subject them to public scrutiny.

Under the arrangement reached with ExxonMobil's board of directors, Tillerson will place the value of some two million company shares that he would have received over the next ten years in an independently managed trust.

Tillerson owned $218 million in Exxon stock, a pension worth $70 million, and between 2012-2015 has had annual compensation packages worth between $28-40 million annually.

He will give up $4.1 million in cash bonuses that had been scheduled to be paid out over the next three years, as well as other benefits. "The net effect of the agreement is a reduction of approximately $7 million in compensation owed to Tillerson," the company said in a statement.

Additionally, Tillerson has committed to selling the more than 600,000 Exxon shares he currently owns. The trust will not be permitted to hold Exxon stock, and Tillerson will be barred from working in the oil and gas industry for the next 10 years.

Despite making these concessions, it is unclear how Tillerson can keep his duties as Secretary of State separate from all the former industry colleagues and politicians he encountered as CEO of the world's largest private oil companies.

Tillerson, who was nominated last month to be President-elect Donald Trump's chief diplomat, retired December 31 after more than forty years at Exxon Mobil, the last ten years as CEO.

Tillerson is regarded as a controversial choice as secretary of state. He has only ever worked at ExxonMobil, and has no experience in politics. Democrats and Republicans have expressed concern over his close relationship with Russian President Vladimir Putin. Putin personally awarded Tillerson with the Order of Friendship.

The FBI, CIA and the White House all have stated that they believe Putin interfered with the US election to help get Donald Trump elected.

Senior Republican senator John McCain, also the chairman of the US Senate Armed Services Committee, has called Putin a "thug and a murderer", and has cast doubt on Tillerson's appointment.

"I and several of my colleagues have concerns about Mr Tillerson, and some of his past activities, specifically his relationship with Vladimir Putin," McCain told reporters on December 27.

Tillerson has also been criticised for deals struck on behalf of ExxonMobil that were at odds with US foreign policy. Tillerson criticised US sanctions against Russia after Putin invaded Crimea.

At the time, Exxon had discovered vast deposits of untapped oil in Russia. Oil and tax revenues fund half of Russia's budget, so this sanction badly affected Putin, while also preventing Exxon from making hundreds of millions of dollars, if not trillions.