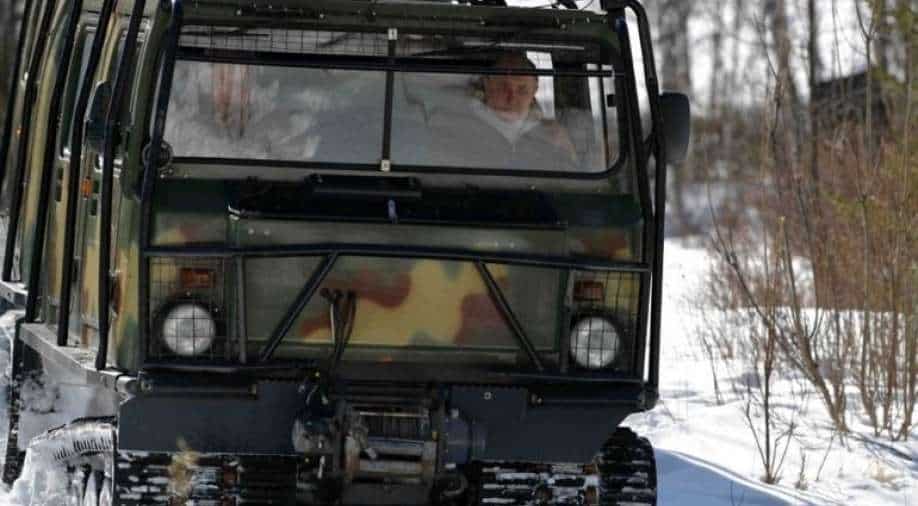 Putin routinely appears on state television participating in various outdoor pursuits to project the image of a healthy and robust leader capable of leading the country for many years to come.

His bare-chested exploits have conjured for many Russians an image of Putin, 68, as an in-shape role model.

Video released by the Kremlin from inside an all-terrain vehicle showed the president at the wheel of a vehicle that pulled branches from overhanging trees as it barrelled over snow-laden tracks through dense forests of birch.

The two men were seen trudging through knee-deep snow and inspecting wooden ruins in a barren forest before taking careful steps across a rope bridge over a frozen river.

Putin, who loves to cultivate a virile man-of-action image, was shown in 2017 on holiday with Shoigu spear-fishing in a camouflage wetsuit, piloting a powerboat and catching some rays.

Last year, he bestowed a 65th birthday honour on Shoigu, his loyal ally in the Syria conflict and companion on wilderness trips.

Putin sent Shoigu birthday greetings and signed a decree awarding him one of Russia's highest decorations, the 'For Merit to the Fatherland' medal in the first degree.

The PR display comes one month after Putin jailed his loudest critic Alexei Navalny in one of Russia's most infamous work colonies, a move the opposition figure's allies and Western countries said was a pretext to silence dissent.

Putin's previous made-for-TV exploits have not been without controversy.

During a 2011 dive in the Black Sea, he allegedly discovered two 15th-century amphoras, a find mocked in the independent media because they were both suspiciously without algae or other sea life. His spokesman later admitted that the scene had been staged.