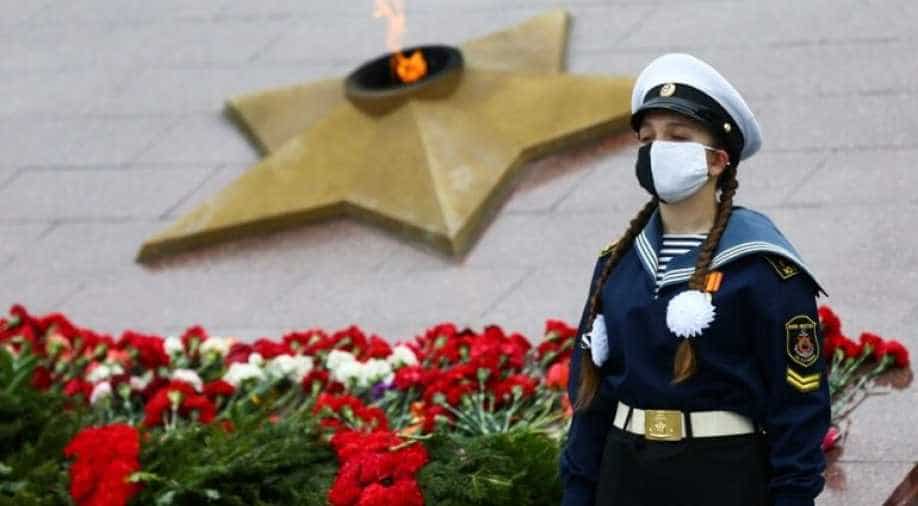 A Russian cadet wearing a face mask stands guard in front of a military memorial during a ceremony to mark the 75th anniversary of the victory over Nazi Germany in World War Two in Vladivostok on May 9, 2020, amid the coronavirus pandemic. Photograph:( AFP )

In the last 24 hours, ninety-four deaths have been recorded in the country, with a total tally of 2,009

As of now, Russia has 221,344 cases of COVID-19 and is the third most infected country. In terms of the growing rate of infections, Russia is right behind the United States.

In the last 24 hours, ninety-four deaths have been recorded in the country, with a total tally of 2,009.

The period was put in place to contain the spread of COVID-19 in the country.

"Starting from tomorrow, May 12, the national period of non-working days will be over for all sectors of the economy," the president said.

According to him, during the period of non-activity, Russia invested in improving and expanding its healthcare services.

This had allowed the country to save “many thousands of lives”, as Putin said. He further asserted plans to gradually reopen the economy over the course of the upcoming weeks.

Starting Sunday, the rate of infection has been jumping phenomenally in Russia. Now, over 10,000 infections are reported daily. On the other hand, west Europe is now in the process of easing lockdown restrictions.

Moscow officials claim that the increase is owing to the increased rate of testing, and also by taking into account patients that are asymptomatic. 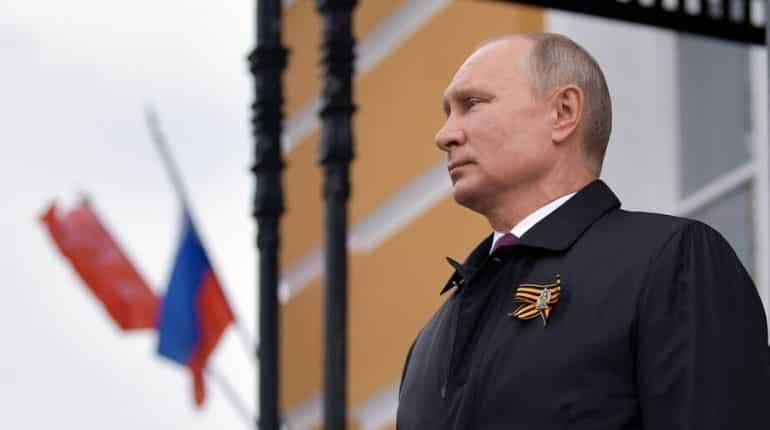 Russian President Vladimir Putin looks at military aircrafts flying over the Kremlin and Red Square to mark the 75th anniversary of the victory over Nazi Germany in World War Two, Moscow, May 9, 2020 | AFP

Russia uses different classification methods to count the infected, and has a mortality rate lower than other countries.

Moscow has remained the hotspot of the virus, and will now remain under restrictions upto May 31.

Starting Tuesday, people in Moscow will be fined for not wearing masks and gloves while using public transport services or in shops.

In Moscow, people may only leave their homes for quick grocery runs, to work, if necessary, and to walk their dogs.

Russia was under a non-working period until May 11.

Saturday marked the occasion of Soviet victory in World War II, but was not met with large-scale parades.

The Soviet Union lost an estimated 26 million people including 8.5 million soldiers in the war.

Putin on Saturday laid flowers at the tomb of the unknown soldier just outside the Kremlin walls and gave a short address honouring the valour and suffering of the Soviet army during the war.

While speaking on the day, President Vladimir Putin did not mention coronavirus at all.

Victory Day is Russia's most important secular holiday. This year marks the 75th anniversary of the remarkable day. The celebrations, however, were shorn of the usual Red Square military parade and a mass procession called The Immortal Regiment as part of measures to stifle the spread of the novel coronavirus.

Some 75 warplanes and helicopters, however, flew over central Moscow to display the country's military might.