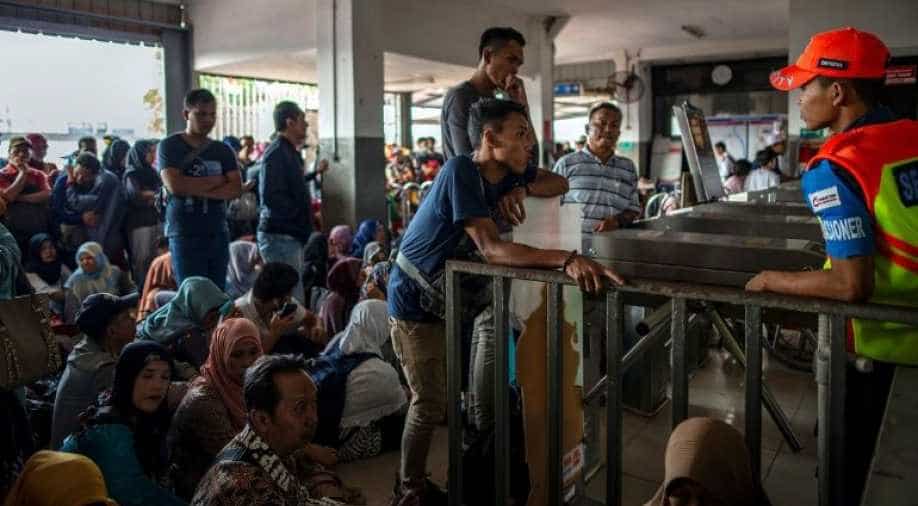 Commuter train passengers rest as they wait to travel to Jakarta outside a station, closed due to a major power blackout, in Banten, Indonesia. Photograph:( Reuters )

Electricity was restored by around 11:00 pm local time in most parts of the capital, nearly 12 hours after disruptions started.

Power was mostly restored in Jakarta and Indonesia's heavily populated Java island after a widespread electricity outage on Sunday that the state utility PLN blamed on disruptions at several power plants.

Tens of millions of people were affected by the blackout which plunged buildings in the sprawling capital -- home to about 30 million people -- into darkness and forced the temporary closure of its new mass rapid transit system.

Passengers were safely evacuated from several MRT carriages when the power went out, according to the system's operator, while commuter trains were also affected.

Electricity was restored by around 11:00 pm local time in most parts of the capital, nearly 12 hours after disruptions started. While the megacity has been hit by blackouts before, Sunday's shutdown was unusually long.

PLN said the massive outage happened when a gas turbine at a major power plant went down and by disruption at another facility. Both are on the western end of Java, the Southeast Asian archipelago's most populous island.

Jakarta's hospitals and Soekarno-Hatta International Airport were not affected because they have backup power generators, officials said.

The blackout caused sporadic disruptions in mobile phone services and cash machines, while some apartment buildings were left in the dark.