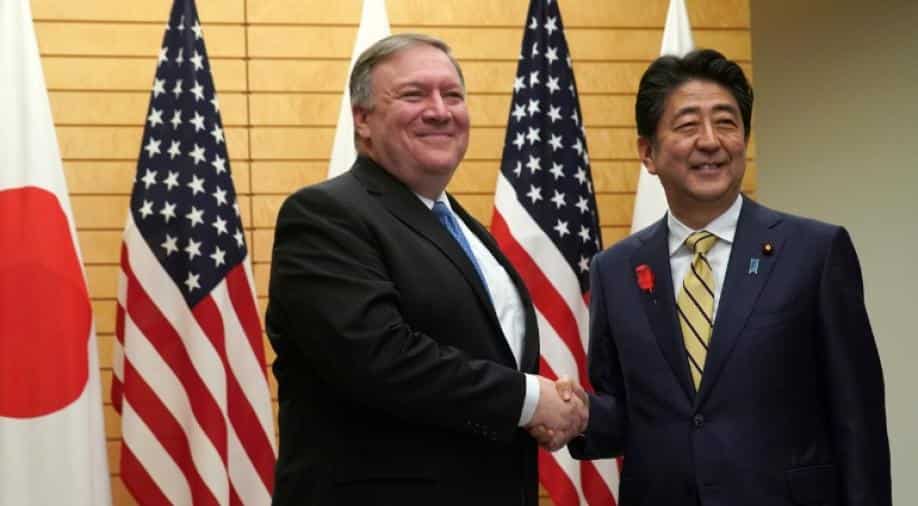 Abe thanked Pompeo, who arrived in Tokyo on Saturday, for coming to Japan before he meets North Korea's leader Kim Jong Un on Sunday.

US Secretary of State Mike Pompeo said on Saturday he would coordinate closely with Japan during denuclearization talks with North Korea and promised to raise the issue of the abductions of Japanese citizens in his meetings in Pyongyang.

"We will have a fully coordinated, unified view of how to proceed, which will be what is needed if it is going to be successful in denuclearizing North Korea," Pompeo told Japanese Prime Minister Shinzo Abe in Tokyo. "We will bring up the issue of the abductees as well," he said.

Abe thanked Pompeo, who arrived in Tokyo on Saturday, for coming to Japan before he meets North Korea's leader Kim Jong Un on Sunday.

Pompeo also said Japan and the United States were in a position to finalise a trade agreement after Abe and US President Donald Trump discussed the issue in New York last month.

The two sides have agreed to start trade talks in an arrangement that, for now, protects Japanese automakers from further tariffs, seen as a major threat to the export-dependent economy. Trump is unhappy with Japan’s $69 billion trade surplus with the United States - nearly two-thirds of it from auto exports - and wants a bilateral agreement to address it.

Despite Kim's pledge to denuclearize the Korean peninsula, Japan, Washington's key ally in Asia, still considers North Korea to be a "dire threat," and is pushing ahead with plans to bolster its ballistic missile defenses with Aegis Ashore batteries that can target warheads in space.

Tokyo also insists that North Korea give a full accounting of Japanese citizens it abducted to train as spies and return any who are still alive before it agrees to normalise ties. A restoration of ties could lead to Japan releasing what could be billions of dollars of war reparations and economic assistance to its impoverished neighbour.

Pompeo will travel to Seoul after leaving Pyongyang and will head to Beijing before returning to the United States on Monday.

Speaking to a pool reporter en route to Tokyo, Pompeo said his aim in Pyongyang was "to make sure we understand what each side is truly trying to achieve." He also said he hoped to be able to agree a "general date and location" for a second summit between Trump and Kim following their first meeting in Singapore in June.

Recently, he angered North Korea by insisting that international sanctions must remain in place until it gives up its nuclear weapons. On Wednesday, he said there was unanimous support for this at last week's UN General Assembly, even if Russia and China "had some ideas about how we might begin to think about a time when it would be appropriate to reduce them."

He declined to say if he would agree to North Korea's demand for a declaration to end the 1950-53 Korean War or to South Korea's suggestion that he avoid pressing again for an inventory of Pyongyang's nuclear weapons to break the stalemate.