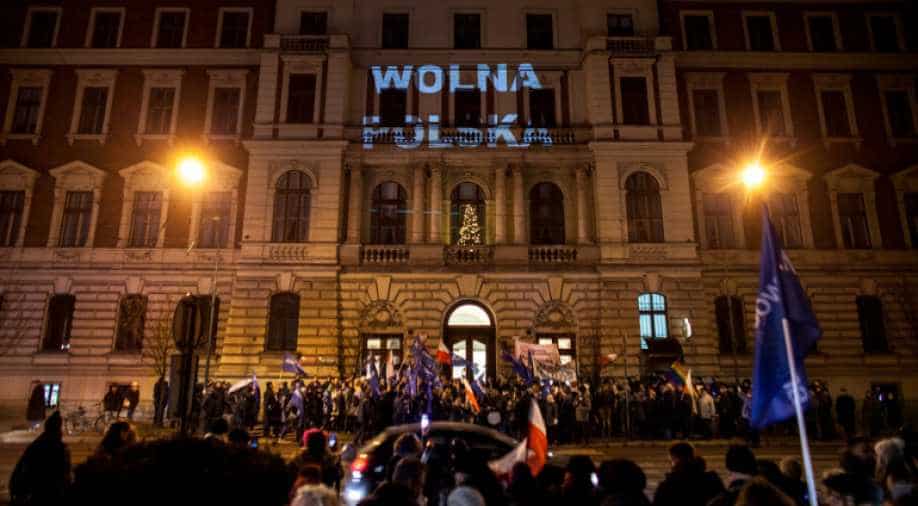 The protesters chanted that lawmakers will remain blocked and called on the head of PiS, Jaroslaw Kaczynski, to come out and face them. Photograph:( Reuters )

Protesters blocked all exits from the Polish parliament on Friday after the opposition said ruling party lawmakers illegally passed the budget for next year by moving the vote outside of the main chamber of parliament.

The protest marked the biggest political standoff in years in the European Union member Poland and the sharpest escalation of the conflict between the opposition and the ruling Law and Justice (PiS) party since it came to power in October last year.

The police attempted in the early hours of Saturday to remove protesters by grabbing them and pulling them aside, but later ceased in their efforts as new protesters arrived at the scene, a Reuters witness said.

The police also called on protesters blocking the parliament to disperse, saying on loudspeakers that they might otherwise use force.

"Everybody sees that PiS has crossed a certain line and nothing will be the same anymore," Tomasz Siemoniak, deputy leader of the biggest opposition party Civic Platform told local media outside parliament.

The parliament was surrounded by hundreds of policemen, some of whom were carrying rubber bullet guns. Police reinforcements were arriving at the parliament as well.

The protesters chanted that lawmakers will remain blocked and called on the head of PiS, Jaroslaw Kaczynski, to come out and face them.

It was unclear how many lawmakers and staffers were inside waiting for the exits to be unblocked. Some opposition lawmakers said they would spend the night in parliament.

Polish opposition parties accused PiS earlier on Friday of violating the constitution after Speaker Marek Kuchcinski moved a key vote on next year's budget outside of the main chamber of parliament and blocked the media from recording the vote.

It was the first time since Poland's transition from communism in 1989 that a sitting of the lower chamber of parliament was conducted outside of the main chamber.

"The 'sitting' was illegal. Period. This is a constitutional crisis," Civic Platform head Grzegorz Schetyna said on social media.

Kuchcinski decided to transfer the sitting and the budget vote outside the main chamber after opposition lawmakers occupied the parliamentary podium protesting against a plan to curb media access and against Kuchcinski's decision to exclude one lawmaker.Ruling party lawmakers said the transfer of the vote was legal and the vote itself was valid.

"What the opposition did was a scandal. And we were working," said PiS lawmaker Jaroslaw Zielinski, who took part in the budget vote.

Opposition parties Civic Platform and Nowoczesna together with the PSL party said in a statement that the speaker has violated the constitution. Opposition lawmakers also said they had problems in accessing the budget vote.

The parties demanded that the parliament sitting be held once again next week.

Since coming to power last year, the nationalist-minded, eurosceptic PiS has tightened its control over public news media and state prosecution and moved to weaken the country's highest court.

PiS is the first party since Poland's transition to democracy to hold an outright majority in parliament.