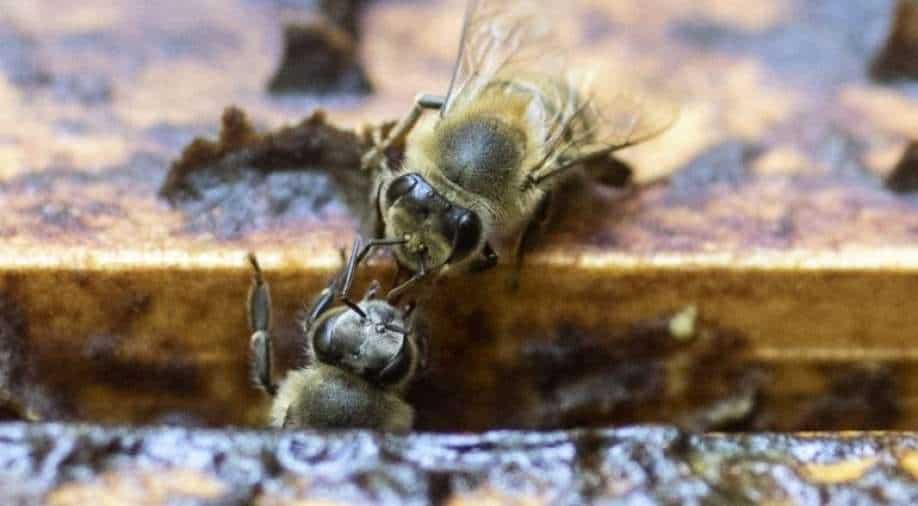 Exposure to a cocktail of agrochemicals significantly increases bee mortality, according to research Wednesday that said regulators may be underestimating the dangers of pesticides in combination.

Bees and other pollinators are crucial for crops and wild habitats and evidence of steep drops in insect populations worldwide has prompted fears of dire consequences for food security and natural ecosystems.

Also read | Bee populations are declining drastically: Find out how this phenomenon can wreak havoc globally

A new meta-analysis of dozens of published studies over the last 20 years looked at the interaction between agrochemicals, parasites and malnutrition on bee behaviours, such as foraging, memory, colony reproduction, and health.

Researchers found that when these different stressors interacted they had a negative effect on bees, greatly increasing the likelihood of death.

The study published in Nature also found that pesticide interaction was likely to be "synergistic", meaning that their combined impact was greater than the sum of their individual effects.

These "interactions between multiple agrochemicals significantly increase bee mortality," said co-author Harry Siviter, of the University of Texas at Austin.

The study concluded that risk assessments that fail to allow for this outcome "may underestimate the interactive effect of anthropogenic stressors on bee mortality".

Researchers said their results "demonstrate that the regulatory process in its current form does not protect bees from the unwanted consequences of complex agrochemical exposure.

"A failure to address this and to continue to expose bees to multiple anthropogenic stressors within agriculture will result in the continued decline in bees and their pollination services, to the detriment of human and ecosystem health," the study concluded.

In a commentary also published in Nature, Adam Vanbergen of France's National Research Institute for Agriculture, Food and Environment said that pollinating insects face threats from intensive agriculture, including chemicals like fungicides and pesticides, as well as a reduction of pollen and nectar from wildflowers.

The industrial-scale use of managed honey bees also increases pollinator exposure to parasites and diseases.

While previous individual studies have looked at how these stressors interplay, the new meta-analysis "confirms that the cocktail of agrochemicals that bees encounter in an intensively farmed environment can create a risk to bee populations".

He said there had been a general focus on impacts on honey bees, but added there is a need for more research on other pollinators, which might react differently to these stressors.

Some 75 per cent of the world's crops producing fruits and seeds for human consumption rely on pollinators, including cocoa, coffee, almonds and cherries, according to the UN.

In 2019 scientists concluded that nearly half of all insect species worldwide are in decline and a third could disappear altogether by the century's end.

One in six species of bees has gone regionally extinct somewhere in the world.

The main drivers of pollinator extinction are thought to be habitat loss and pesticide use.