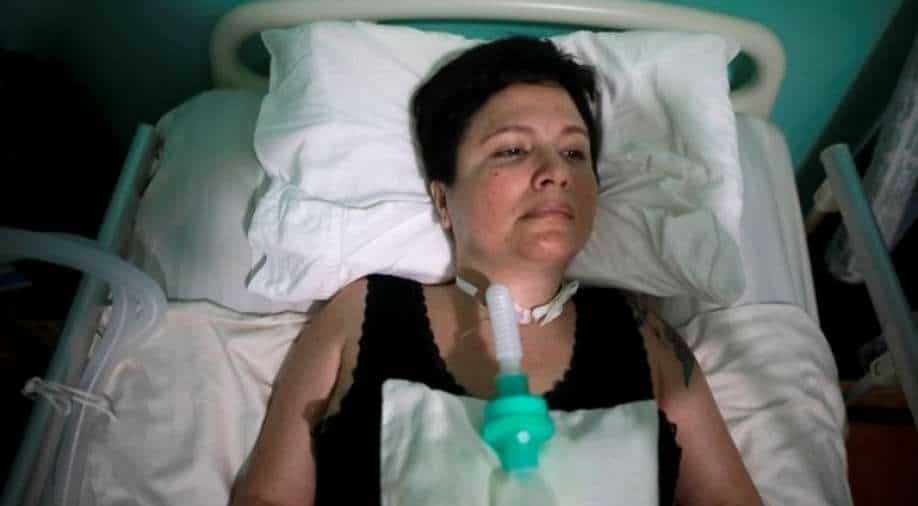 Ana Estrada, 43, a euthanasia advocate who suffers from an incurable condition that atrophies her muscles and has left her breathing through a ventilator, lies in bed at her home in Lima, Peru February 7, 2020 Photograph:( Reuters )

Confined to her bed, Estrada said that she feels "happy and content" about the decision after the government decided against appealing a court ruling which recognised her right to die

Ana Estrada on Tuesday won a historic battle over the right to die in Peru - a Roman Catholic country where euthanasia remains illegal.

Confined to her bed, Estrada told Reuters that she feels "happy and content" about the decision after the government decided against appealing a court ruling which recognised her right to die.

"It is an individual case, but I hope it serves as a precedent," Estrada, 44, told Reuters.

Peru Ministries of Justice and Health on Tuesday decided to honour a judge's ruling which decreed that she has the right "to a dignified death".

A psychologist, Estrada has suffered from polymyositis for three decades. Considered an incurable disease, it progressively attacks the muscles. Most of the time, Estrada requires a respirator to breathe.

Five years ago, Estrada began her legal battle for her right to die "when the time comes."

Euthanasia remains a debated topic across the world and is banned in many parts including Peru. In southern America, only Colombia allows the procedure, that too under certain conditions.

The court ruling also added that the state health insurer EsSalud must provide "all conditions" that may be required for Estrada's death. All this must happen within 10 days from when she decides to end her life. In a statement, EsSalud said that it would follow up on the ruling, and in addition form medical commissions to develop a protocol for such cases.

Even though local law prohibits people from helping others to die, the court ruled that anyone who helped Estrada will not face charges.