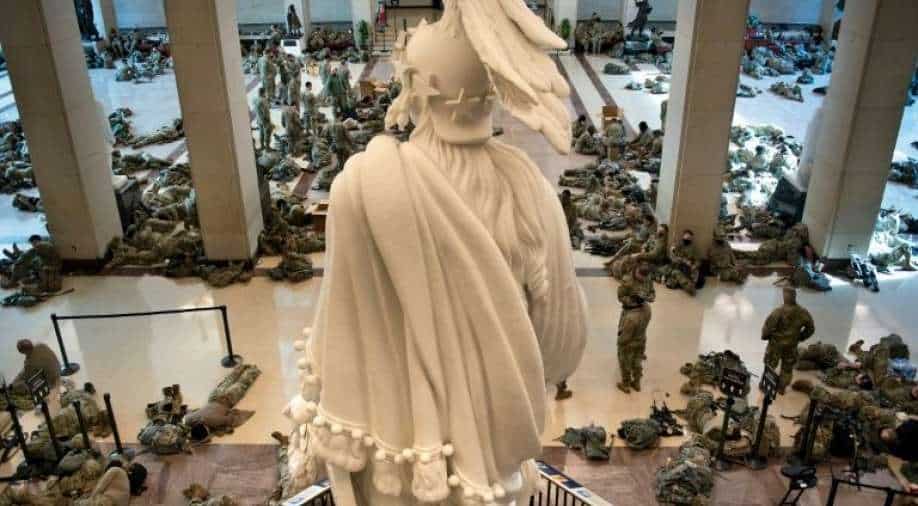 Members of the National Guard rest inside the US Capitol Photograph:( AFP )

A number of the 25,000 troops standing guard around the US Capitol in recent days in the wake of the January 6 insurrection had been allowed to take breaks and naps in between long shifts on the floors of the building housing the US Congress.

A decision to turn a chilly underground parking garage into an overnight billet for National Guard troops in Washington to protect President Joe Biden's inauguration has stirred an uproar.

A number of the 25,000 troops standing guard around the US Capitol in recent days in the wake of the January 6 insurrection had been allowed to take breaks and naps in between long shifts on the floors of the building housing the US Congress.

But on Thursday afternoon, after the legislature resumed work a day after the Biden inauguration, someone decided instead to force them out to a nearby parking garage.

Photos that spread quickly over the internet showed guardsmen and women stretched out under flourescent lights in parking slots, with few toilets, outlets for charging phones, or other facilities available.

Many members of Congress, noting that many of the troops came from their constituencies, voiced outrage.

"This is an insult to all National Guard units that followed orders and served in the cold and rain through the night without fail. They protected our Capitol when we needed them most," said Representative Brendan Boyle on Twitter.

"What happened was an outrage and it will never happen again," said Chuck Schumer, the new Senate Majority leader, as he walked in a hall in the Capitol with dozens of soldiers sleeping on both sides.

Schumer said nobody knew exactly who ordered the part-time soldiers moved to the garage.

Echoing the recriminations over responsibility for letting hundreds of violent supporters of then-president Donald Trump crash the Capitol on January 6, National Guard officials said Capitol Police told them to move to the garage, and the Capitol Police denied it.

They "did not instruct the National Guard to vacate Capitol building facilities," said Acting Capitol Police Chief Yogananda Pittman in a statement.

"As of this morning, all Guardsmen and women have ben relocated to space within the Capitol complex."