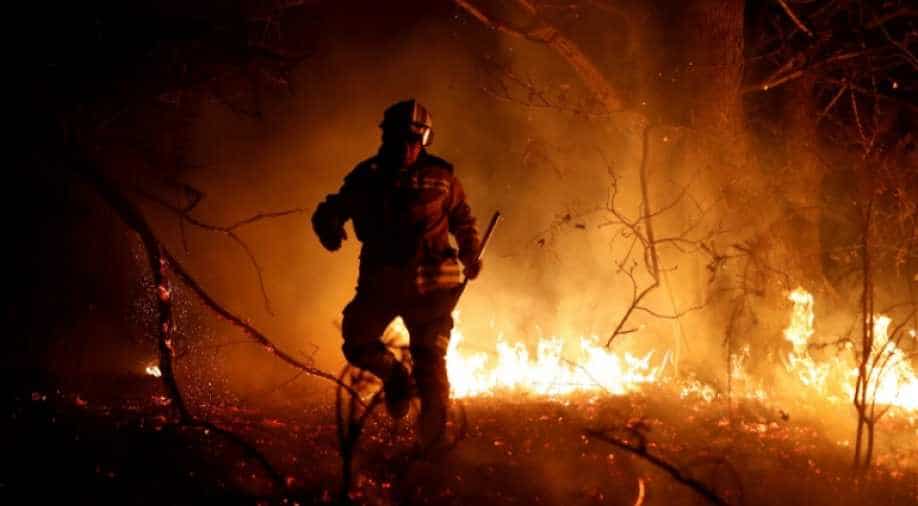 The risk of forest fires in Asturias was classified as very high on Monday due to unseasonably high temperatures combined with low humidity, factors that have caused authorities to ban all outdoor fires.

Spain has been struck by more than 120 wildfires in the northern regions of Asturias and Cantabria, where warm temperatures and strong overnight winds have fanned flames, and investigators believed many might have been ignited deliberately, officials said Monday.

"I am following the evolution of the active fires in Asturias," said Prime Minister Pedro Sánchez. "Unfortunately the wind is hindering the performance of the helicopters and, in addition, it has stoked the fires. My support and thanks to all the emergency services that are working in the area," he added in a statement.

Fire services had deployed an additional 300 personnel to the usually verdant and mountainous area of Asturias, the region's fire service said, with another 30 being tasked with trying to coordinate efforts to extinguish the flames.

Asturias said it had reinforced its normal service with 50 firefighters and had deployed six fire trucks and two water supply vehicles.

The Ministry of Agriculture, Fisheries and Food said it was going to transfer two water-carrying planes to Asturias and increase the number of water-bombing helicopters to five.

The risk of forest fires in Asturias was classified as very high on Monday due to unseasonably high temperatures combined with low humidity, factors that have caused authorities to ban all outdoor fires.

Sanchez said he had telephoned Javier Fernandez, President of the regional government of Asturias to offer him the all the support of the state.
Officials in Cantabria said they had reasons to suspect that more than 60 fires had been started intentionally.

Firefighters were hard at work to try and stop the flames reaching inhabited areas in Aes (Puente Viesgo), in Bárcena Mayor (Los Tojos).

A large wildfire has put at risk Ermita del Carmen in Los Llanos de Penagos, the 17th-century hermitage with a historically important chapel dedicated to the Virgin Mary, officials said.

The regional government of Cantabria has called for citizens to help by avoiding activities that might heighten the risk of fires and to help identify the culprits involved in setting fires.

Fires that have been deliberately lit usually provide several clues, especially when several strong outbreaks have been found in a relatively small area or when evidence of fire-lighting substances has been found.

The Iberian Peninsula has in recent years been increasingly at risk of wildfires during the long, dry summer season, but it is unusual for such fierce outbreaks to emerge so early in the year.