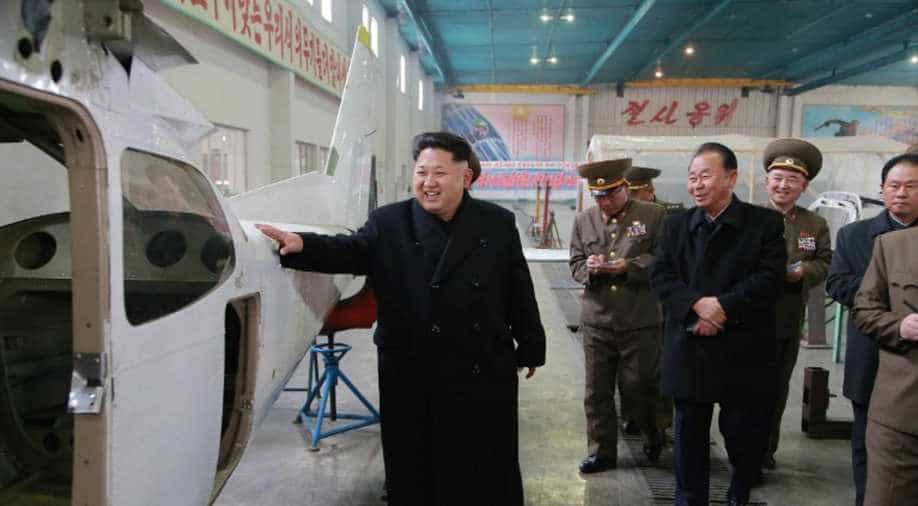 The sanctions are the first that name the country's 'Supreme Leader', as well as the first targeting of the reclusive state for rights violations. Photograph:( AFP )

Follow Us
North Korea said on Friday that the new US sanctions targeting its leader Kim Jong-Un amounted to a "declaration of a war" and vowed to take strong retaliatory measures.

The move by the United States constituted "the worst-ever hostile act" and "an open declaration of a war" against the North, Pyongyang's foreign ministry said in a statement, carried by the official Korean Central News Agency.

The US on Wednesday placed Kim on its sanctions blacklist, calling him directly responsible for a long list of serious human rights abuses.

The sanctions are the first that name the country's "Supreme Leader", as well as the first targeting of the reclusive state for rights violations.

Pyongyang, in its first response to the sanctions, urged Washington to withdraw them immediately, warning that the North would instantly cut off all diplomatic channels if they failed to do so.

"The United States has dared to challenge the highest authority of ours, committing the worst-ever hostile act that goes beyond confrontation over the so-called human rights issue. This constitutes an open declaration of a war," the statement said.

"Now that the US has made a declaration of a war against us, all issues arising from relations with the US will forthwith be handled in accordance with DPRK's wartime laws," it said, using the official acronym for North Korea.

Pyongyang will take "extremely strong countermeasures" in response, it added, without elaborating on what this could entail.

Ten other top officials were also blacklisted by the US, accused of being behind widespread abuses that have made North Korea "among the world's most repressive countries".

South Korea on Thursday welcomed the move by the US, saying it hoped the move would shine a light on human rights "violations" in the North.