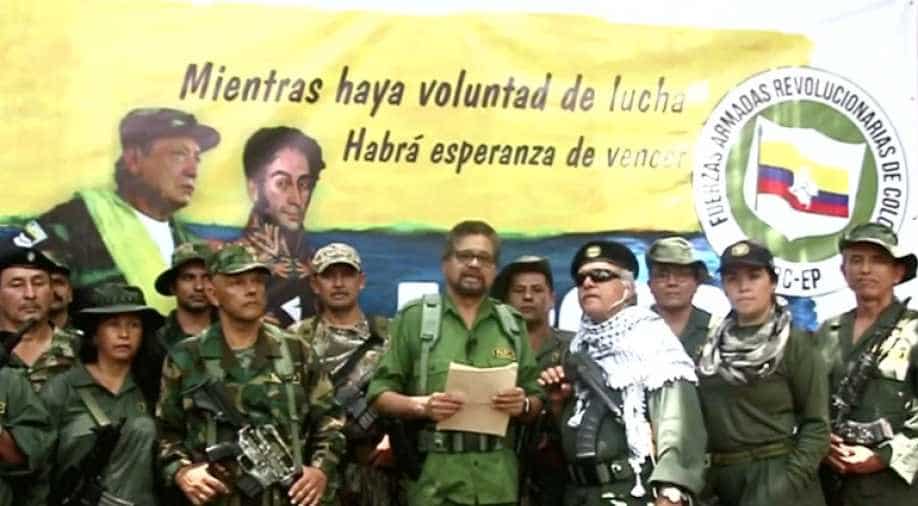 Former FARC Commander known by his alias Ivan Marquez reads a statement that they will take they insurgency once again, in this undated screen grab obtained from a video released on August 29, 2019. Photograph:( Reuters )

Former commanders Ivan Marquez and Jesus Santrich on Thursday appeared surrounded by armed fighters in a 32-minute YouTube video to launch renewed hostilities against the government, saying the 2016 peace accords have been betrayed

Nine dissidents formerly of the Revolutionary Armed Forces of Colombia (FARC), including a commander, were killed in a bombing raid in southern Colombia, President Ivan Duque said on Friday, the first since former leaders of the group announced a new offensive this week.

Former commanders Ivan Marquez and Jesus Santrich on Thursday appeared surrounded by armed fighters in a 32-minute YouTube video to launch renewed hostilities against the government, saying the 2016 peace accords have been betrayed.

The announcement was condemned by the government, the United Nations and the FARC political party, whose leadership said the majority of ex-rebels remain committed to peace despite "difficulties and dangers."

The bombing took place in the municipality of San Vicente del Caguan, in the jungle province of Caqueta, Duque said.

"Thanks to strategic, meticulous, impeccable and rigorous work, Gildardo Cucho, a leader in this organisation, was killed," Duque told journalists in the city of Sincelejo.

"This criminal was dedicated to drug trafficking, kidnapping, the intimidation of social leaders and he was expected to be part of this threatening new group which yesterday presented itself to the country as a new rebel group - which it isn`t because it`s a narco-terrorist gang," Duque said.

Dissidents from FARC include some guerrillas who refused outright to demobilize under the peace deal and others who initially backed the process before returning to fight. More than 260,000 people have been killed and millions displaced during Colombia`s decades-long conflict between the government, rebel groups, crime gangs and right-wing paramilitaries.

Dissident forces are estimated to number more than 2,200. Many are thought to be based in Venezuela, where President Nicolas Maduro has said former rebels commanders were welcome.

The peace accord has come under pressure on various fronts, including the murder of hundreds of former rebels and human rights activists, delays in funding for economic efforts by former combatants, and deep political polarization.

Some 13,000 FARC members, including 7,000 combatants, demobilized under the accord, many joining reintegration efforts or returning home to their families.