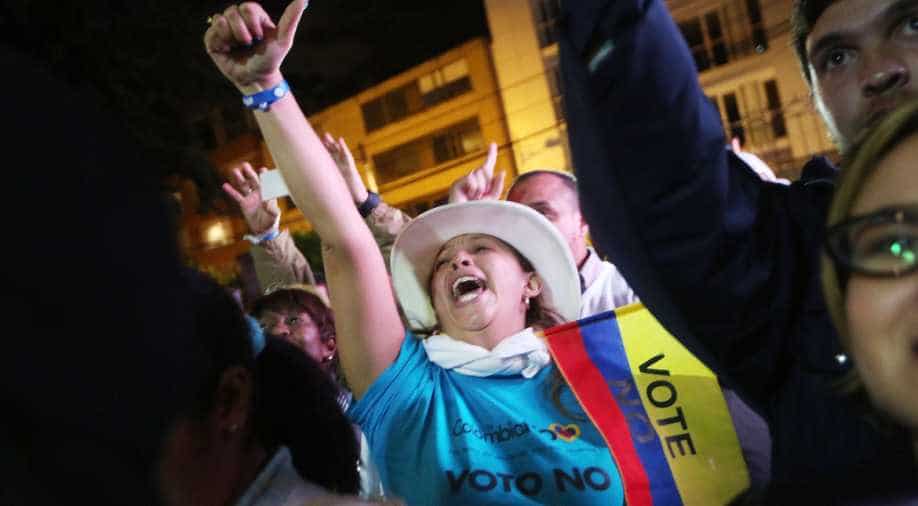 The ratification, and signing last week begins a six-month countdown for the 7,000-strong FARC, which started as a rebellion fighting rural poverty, to abandon weapons and form a political party. Photograph:( Getty )

Colombia's Congress approved a new peace deal with FARC (Revolutionary Armed Forces of Columbia) rebels late on Wednesday, despite objections from former president and now senator Alvaro Uribe, who said it was still too lenient on the insurgents who have battled the government for 52 years.

The agreement was approved in the lower house by 130-0, a day after the Senate ratified it 75-0. Lawmakers from Uribe's Democratic Center party left the floors of both houses in protest just before voting began.

The ratification - and signing last week - begins a six-month countdown for the 7,000-strong FARC, which started as a rebellion fighting rural poverty, to abandon weapons and form a political party.

President Juan Manuel Santos and rebel leader Rodrigo Londono signed the revised accord last week in a sober ceremony after the first deal was rejected in a national plebiscite.

Santos, who won the Nobel Peace Prize in October for his peace efforts, wants to get the deal implemented as quickly as possible to maintain a fragile ceasefire.

Uribe's supporters argued the deal offered too many concessions to FARC, and did not serve as a deterrent for other groups involved in crime.

"Let's not forget what we are doing today, we're trying to end more than 50 years of war," government negotiator Sergio Jaramillo said.

The new agreement to end Latin America's longest insurgency was put together in just over a month after the original pact, which allowed the rebels to hold public office and skip jail, was narrowly and unexpectedly defeated in an October 2 referendum.

While the government says the accord includes most of the proposals put forward by those who rejected it, the new document did not alter those two key provisions. That angered many among Colombia's largely conservative population, who are also furious that Santos decided to ratify the deal in Congress instead of holding another plebiscite.

The government and FARC worked together in Cuba for four years to negotiate an end to the region's longest-running conflict that has killed more than 220,000 and displaced millions in the Andean nation.

An end to the war with FARC is unlikely to end violence in Colombia as the lucrative cocaine business has given rise to criminal gangs and traffickers.