More than 1,000 queue for food in rich Geneva amid virus shutdown 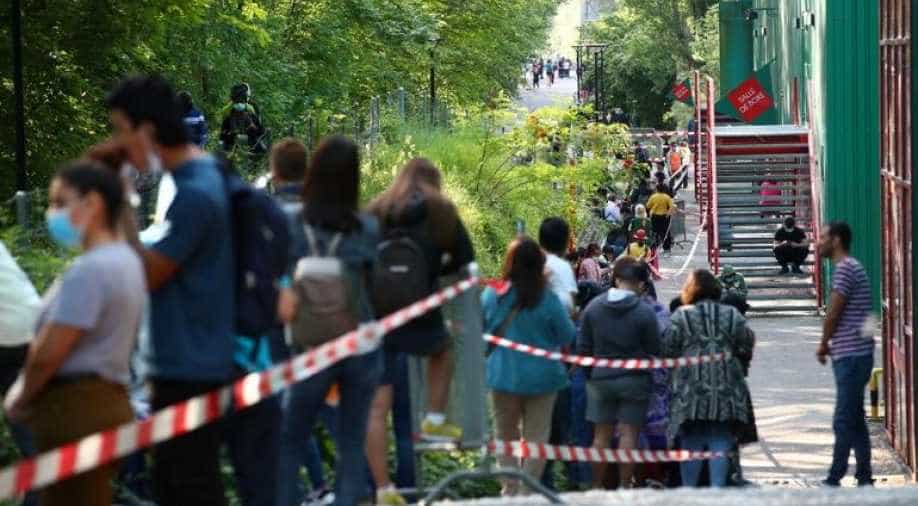 Swiss bank UBS has calculated that afer Zurich, Geneva is the second-most expensive global city for a family of three to live in.

More than 1,000 people queued up on Saturday to get free food parcels in Geneva, underscoring the impact of the coronavirus epidemic on the working poor and undocumented immigrants even in wealthy Switzerland.

The line of people stretched for more than 1 km (half a mile) outside an ice rink where volunteers were handing out around 1,500 parcels to people who started queuing as early as 5 a.m.

"At the end of the month, my pockets are empty. We have to pay the bills, the insurance, everything," said Ingrid Berala, a Geneva resident from Nicaragua who works part-time. "This is great, because there is food for a week, a week of relief...I don`t know for next week."

In a nation of nearly 8.6 million, 660,000 people in Switzerland were poor in 2018, charity Caritas says, particularly single parents and those with a low level of education unable to find work after losing a job.

Swiss bank UBS has calculated that Geneva is the second-most expensive global city for a family of three to live in, behind only Zurich. While average incomes are also high, that helps little for people struggling to make ends meet.

"I think a lot people are aware of this, but it is different to see this with your own eyes," said Silvana Matromatteo, head of the aid group Geneva Solidarity Caravan.

"We had people in tears who said `It is not possible that it is happening in my country`. But it is here and maybe the COVID-19 brought everything out and this is good, because we will be able to take measures to support all these workers, because they are workers above all."

Patrick Wieland, chief of mission for the Doctors Without Borders group, said a survey last week showed just over half the food recipients interviewed were undocumented, while others had attained legal status, were Swiss or were seeking asylum.

Just over 3% had been tested positive for COVID-19, three times the overall rate in Geneva, which he attributed to poor and overcrowded housing.

"In Geneva, one of the richest cities in the world, there have always been people living precariously, especially all the people who work as housekeepers, in agriculture, on construction sites or in hotels, and they found themselves overnight without a job because of COVID-19," he said.

One illegal immigrant who called himself Fernando said he lost his restaurant job during the crisis and had no pay.

"I`m very grateful to receive this help and if the situation changes for me, I am committing to do the same thing that they are doing for me," he said.