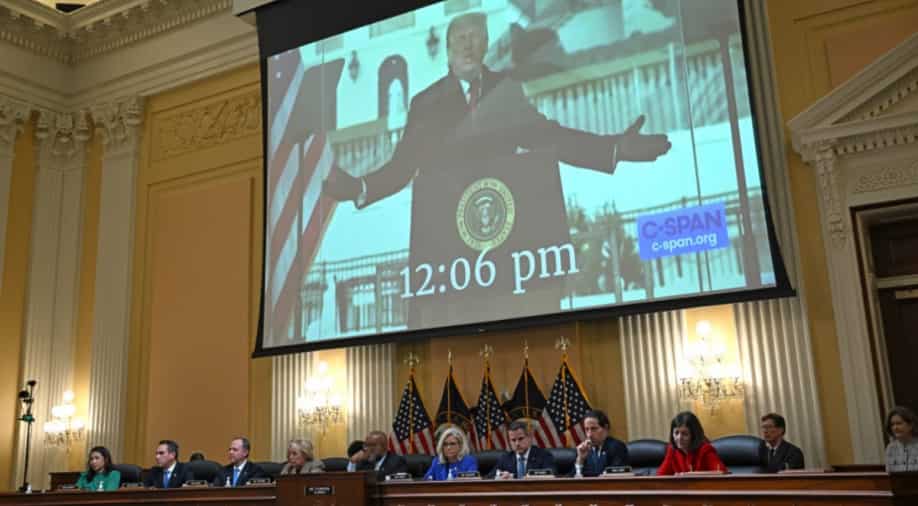 A screen shows former US President Donald Trump speaking on January 6, 2021, during a House Select Committee hearing to Investigate the January 6th Attack on the US Capitol, in the Cannon House Office Building on Capitol Hill in Washington, DC Photograph:( AFP )

According to testimony at a hearing of the committee investigating the insurgency, top advisers to Trump told him that his claims of widespread election fraud were unfounded and would not reverse his election loss

After former US attorney general Bill Barr lashed out at former President Donald Trump, the latter has now blasted the Capitol riot hearings as a "mockery of justice."

Slamming for Democratic-led panel by calling it "a Kangaroo Court, hoping to distract the American people from the great pain they are experiencing," Trump said that it should instead be focusing on the country's larger problems.

He added: "The truth is that Americans showed up in Washington, DC in massive numbers... on January 6th, 2021, to hold their elected officials accountable for the obvious signs of criminal activity throughout the Election."

According to testimony at a hearing of the committee investigating the insurgency, top advisers to Trump told him that his claims of widespread election fraud were unfounded and would not reverse his election loss.

After his November election defeat, officials working on Trump's campaign and in his administration said they told Trump that they found no merit in a wide range of allegations that surfaced.

Also read | 'No interest in facts': Barr lashes out at Trump in Capitol riots hearing

From planting a "suspicious suitcase" containing fake ballots to swapping computer chips into voting machines, Trump had made several allegations against the Democratic Party.

But in his testimony Barr, who was loyal to the Republican president, called Trump delusional for believing something that was not real.

Encouraging his supporters to march on the Capitol, Trump ignored the advice of many of his own staffers when he claimed that the 2020 presidential election was "stolen" from him.