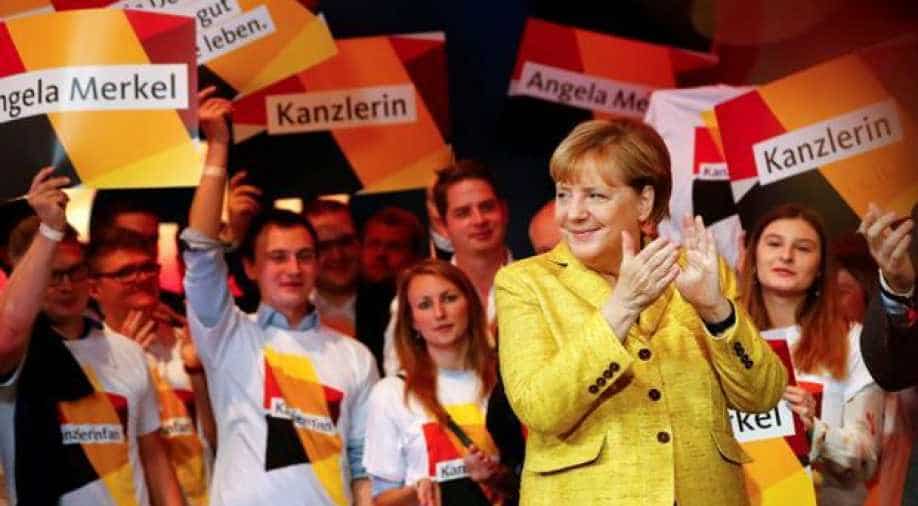 Chancellor Angela Merkel is expected to cruise to victory in elections Sunday but also to face the breakthrough into parliament of hard-right populists for the first time in Germany's post-war history.

For months, the woman now dubbed the "eternal chancellor" has been the favourite over her centre-left rival Martin Schulz and looked set to win another term and match the 16-year reign of her mentor Helmut Kohl.

To many in the West, a fourth Merkel victory will come as a relief in a turbulent world, with hopes she will serve as a calm-headed counterweight to US President Donald Trump and Russia's Vladimir Putin and as the key EU ally to reformist French President Emmanuel Macron.

But the election is also expected to mark a milestone for the four-year-old Alternative for Germany (AfD) which, like right-wing populists elsewhere, rails against migrants, Muslims and mainstream parties.

It has been polling at 11-13 percent and could become Germany's third strongest party, driven by anger over the influx of one million migrants and refugees, many from war-torn Syria, Iraq and Afghanistan, since 2015.

"The AfD's entry into the Bundestag marks an epochal step forward for the far right," said Joerg Forbrig of think-tank the German Marshall Fund of the United States.

By entering parliament, he said, "the xenophobic, revisionist and anti-European political force" will have heightened visibility and access to campaign finance, dozens of offices and hundreds of staff.

After a "vicious" campaign, in which the AfD demanded an end to German guilt over two world wars, Forbig warned that "German democracy is about to face its biggest stress test ever".

At Merkel's final major stump speech Friday in the southern city of Munich, right-wing activists tried to drown her out with whistles and vuvuzelas and chants of "get lost".

But the 63-year-old refused to be derailed from her stability-and-prosperity mantra, telling the crowd that "the future of Germany will definitely not be built with whistles and hollers".

Schulz, for his part, recalled with pride the SPD's history of resisting the Nazi regime and told a Berlin rally that "this Alternative for Germany is no alternative. They are a shame for our nation."

Aside from the populist noise, the past two months of campaigning have been widely criticised as lacklustre, with few hot-button issues dividing the main contenders.

The more outspoken Schulz, former president of the European Parliament, has told voters to reject Merkel's "sleeping-pill politics" and vote against "another four years of stagnation and lethargy".

In greying Germany, more than half of the 61 million voters are aged 52 or older, and especially Merkel's conservatives have pitched a low-key and reassuring message of stability and prosperity.

On Saturday, Merkel -- who has signalled she was running again mainly out of a sense of duty -- urged her supporters to cast their ballots with a folksy call to "bring home the bacon".

For the past term, Merkel's CDU has ruled with the SPD as its junior partner in a "grand coalition", marked by broad agreement on major topics, from foreign policy to migration.

Governing in Merkel's shadow has cost the SPD voter support, and polls give it 21-22 percent compared to 34-36 percent for Merkel's conservative bloc, which also includes the Bavarian CSU.

Looking at the surveys, many rank-and-file SPD members believe the traditional working class party would benefit from a stint in opposition to rekindle its fighting spirit.

This would leave the presumed winner Merkel in need of new coalition partners -- possibly the liberal and pro-business Free Democrats, who are hoping for a comeback after crashing out of parliament four years ago.

Another potential partner would be the ecologist and left-leaning Greens party, which, however, starkly differs with the FDP on issues from climate change to migration policy.