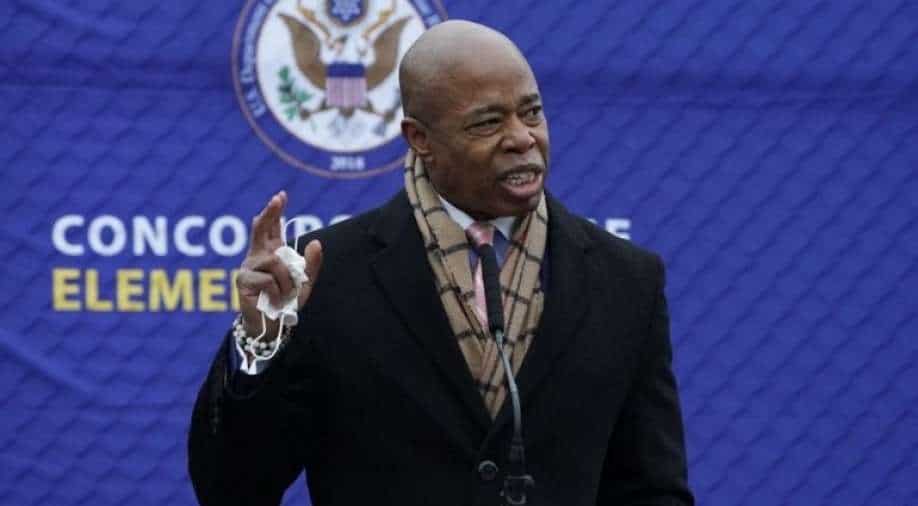 Adams outlined a “national urban agenda” — and perhaps a blueprint for Democrats in the years ahead — that focuses on public safety, child care and infrastructure and called for more federal funding for programs like violence interrupters

Mayor Eric Adams, in his first trip to Washington since taking office in New York City, encouraged mayors from across the country to be honest about the immense challenges facing cities as they recover from the pandemic, and to address them by being “radically practical.”

Adams outlined a “national urban agenda” — and perhaps a blueprint for Democrats in the years ahead — that focuses on public safety, child care and infrastructure and called for more federal funding for programs like violence interrupters.

“This is how we create safer, more prosperous cities as we recover — this is how we bring our country back,” Adams said Thursday in a featured speaking slot at the United States Conference of Mayors. “That’s being radically practical.”

Adams, a former police captain who has called himself the “future of the Democratic Party,” has captured national attention in his first weeks in office, even becoming the subject of a “Saturday Night Live” skit about his pledge to bring “swagger” to City Hall.

Since he was sworn in Jan. 1, Adams has sought to become the city’s cheerleader during an alarming wave of coronavirus cases, and he is facing other major challenges. Several incidents have proved how difficult it will be to improve public safety: On Saturday, a woman was pushed to her death at the Times Square subway station by a homeless man; four days later, a baby girl was hit by a stray bullet in the Bronx; and early Thursday, a police detective was shot in the leg.

Adams has mentioned the idea of being “radically practical” before, arguing that he wants to focus on the nuts and bolts of running an efficient city government and delivering services.

Part of that philosophy, the mayor said, involved being honest about the challenges cities are facing in the wake of the pandemic, and he encouraged his mayoral counterparts to not sugarcoat things.

“We can’t pretend that our streets and subways are safe,” he said, “when people can see that guns and violence are killing people every day.”

Adams was one of several mayors who spoke at the four-day gathering in Washington, including Lori Lightfoot of Chicago and Eric Garcetti of Los Angeles, with whom Adams, wearing his signature “Get Stuff Done” face mask, posed for a photo on Twitter. President Joe Biden was expected to close the event with a speech Friday.

Other New York City mayors have used the conference to raise their profile. In his first days in office in 2014, Bill de Blasio was welcomed as a left-wing rock star and called for a “national urban consensus” on issues like transportation and affordable housing. When Michael Bloomberg was weighing a third-party presidential campaign in 2008, he used his speech at the conference to attack partisan politics and Congress’ failure to fix immigration policy.

Adams also took aim at the federal government in his speech, even though Democrats control it.

“With so much dysfunction in Washington and division in our nation, now is the time for mayors to lead America,” he said.

Adams was introduced by Francis X. Suarez, the mayor of Miami and the president of the U.S. Conference of Mayors, who noted that he, like Adams, received his paycheck in Bitcoin — part of a campaign to promote cryptocurrencies. Suarez called Adams a “dear friend, a genuine person and incredibly humble.”

Adams called for more federal funding for infrastructure, beyond the enormous federal bill approved last year, to pay for housing, transportation and environmental programs. And he called for better coordination with federal and state law enforcement officials and more funding for violence interrupters and job training.

Adams has embraced “Get Stuff Done” as the theme of his first 100 days, but he has not detailed what specifically he wants to prioritize beyond addressing violent crime. Instead of pushing one major policy idea like de Blasio, who focused on universal prekindergarten during his first months as mayor, Adams has pledged to work on the basics.

Indeed, on his first day in office, Adams said in his first televised speech: “Now is the time to be radically practical.”

“That doesn’t just mean grand plans and proposals,” he said. “It means weeding out the waste and eliminating the inefficiencies.”

Asked about his one big idea during the competitive Democratic primary last year, Adams pointed to his proposal called the “People’s Plan.” It included tax credits for poor New Yorkers, free and low-cost child care for children under 3, and an online portal called MyCity to apply for benefits like food stamps.

His first campaign ad during the general election also focused on “universal child care,” and he returned to that theme in his speech Thursday, urging the White House and Congress to approve a plan to pay for it.

“Any working-class or low-income parent who cannot work because they cannot find affordable child care will be trapped in a negative economic cycle forever,” he said.