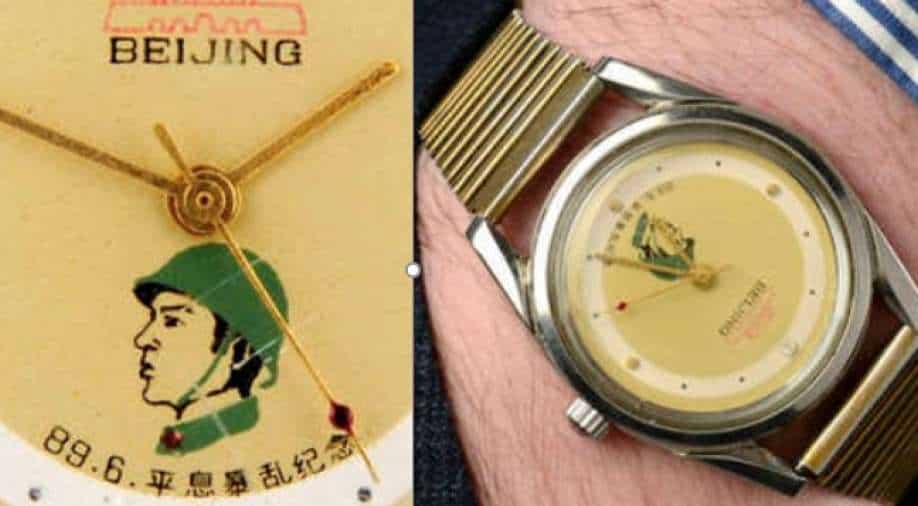 The watch in question (Courtesy: Fellows) Photograph:( Others )

The watch, estimated to be worth £2,500 – £3,500, awarded to members of China’s People’s Liberation Army (PLA) troops to commemorate the 1989 Tiananmen massacre, was up for sale at the UK luxury auction house, Fellows. But later it was reported that the vendor had received online threats.

A UK auction house has withdrawn from sale a rare watch given to Chinese soldiers as a reward for their role in the Tiananmen Square massacre of pro-democracy activists in 1989.

The watch, estimated to be worth £2,500 – £3,500, awarded to members of China’s People’s Liberation Army (PLA) troops to commemorate the massacre was up for sale at the luxury auction house, Fellows. But later it was reported that the vendor had received threats.

A media report said all threats had been received digitally.

“The watch was given to troops by the Communist Party Beijing Committee and Beijing Municipal Government following the 1989 Tiananmen Square protests in Beijing,” the listing on Fellows’ website had read.

The Beijing Tiananmen Square democratic protests were led by students in June 1989. A military crackdown was ordered to suppress the protests, and once the PLA were sent to occupy parts of central Beijing, the incident resulted in many lives lost, although the exact number is often disputed.

The watch had sparked questions over the ethics of profiting from an item associated with an atrocity.

Estimates of the number of people killed when soldiers violently cleared student protesters from Tiananmen Square and surrounding streets in Beijing, thought still unknown, range into the thousands.

Chinese-Australian artist Badiucao accused the auction house of “auctioning evidence of the Tiananmen massacre” in a tweet on Thursday.

The sale of Nazi memorabilia is illegal in some parts of Europe, though no rules exist forbidding the auction of items relating to the Tiananmen Massacre.

In response to Fellows’ statement of withdrawing the sale, Badiucao said the auction house had appeared to be conducting “crisis management”.