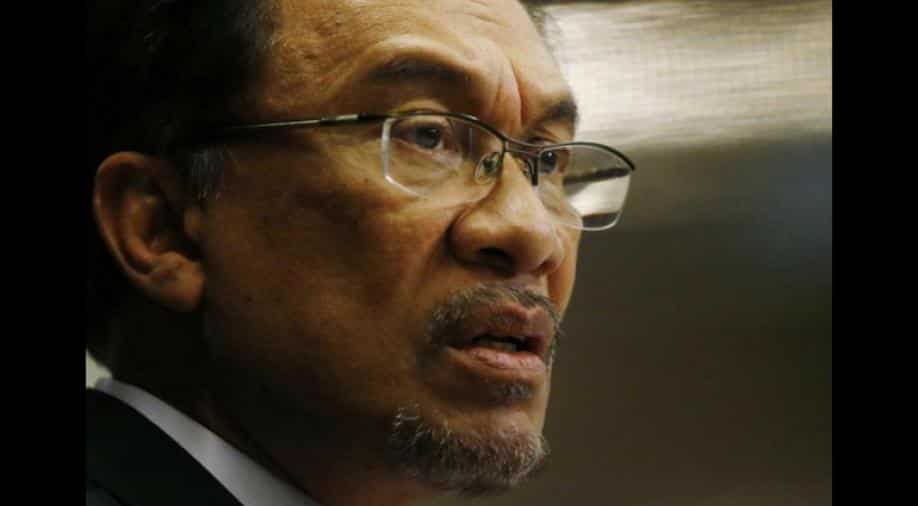 Winning the seat was a key requirement for Anwar to succeed 93-year-old Prime Minister Mahathir Mohamad.

Anwar Ibrahim won an overwhelming mandate in a parliamentary by-election Saturday, setting the stage for his return to frontline Malaysian politics and sealing the once-jailed opposition figure's remarkable resurrection.

Winning the seat was a key requirement for Anwar to succeed 93-year-old Prime Minister Mahathir Mohamad, who jailed his former protege and heir apparent on sodomy and corruption charges in 1998 when their relationship soured.

Mahathir returned to the premiership this year after a shock election win, saying he would stay in power for only two years before handing the reins to Anwar.

Figures from the Election Commission showed Anwar got more than 71 percent of the total votes cast in a seven-way contest -- which included a former aide who lodged the sodomy charges that landed Anwar in prison for a second time in 2014.

"I am happy with the results. Allah bless us all," Anwar, 71, said after the victory, which marks the charismatic politician's stunning political comeback from prison to parliament.

Anwar was in prison when he forged an unlikely alliance with Mahathir in a bid to unseat then-prime minister Najib Razak, who had called elections for May amid massive corruption allegations.

Anwar said late Saturday he told Mahathir about the win and the prime minister was "pleased with the result".

"In parliament, I will focus on assisting our MPs to embark on carrying out effective reforms," he declared.

But James Chin, a Malaysia specialist at the University of Tasmania, said he expects Anwar to be appointed to the cabinet soon.

"A person like Anwar cannot be a backbencher for long. He has to be in the cabinet," Chin told AFP.

"I can guarantee you that people will now be calling this government the Mahathir-Anwar administration, a throwback to the 1980s."

Underscoring the drama of Saturday's vote, one of Anwar's six challengers was Saiful Bukhari Azlan, the ex-aide who had accused him of sodomy, still illegal in the largely Muslim country. Saiful got only 82 votes.

Polls opened under cloudy skies at 8am (0000 GMT) and closed nine and a half hours later in the sleepy southern coastal town of Port Dickson, home to a sizeable ethnic Chinese community that has traditionally been one of Anwar's pillars of support.

"We are voting for the next premier. We need an influential leader to bring long-overdue progress to Port Dickson," said 60-year-old voter Lee Tian Hock.

"This morning, I prayed to Allah for a big win for Anwar," retired truck driver Mat Taib, a member of the country's ethnic Malay majority, told AFP.

"I want him to be our eighth prime minister."

As Anwar hugged his wife and partymates, dozens of supporters erupted into shouts of "Reformasi" -- his battle cry while in opposition -- after he was declared winner.

There had been little doubt the charismatic politician would win the seat, which was vacated after a member of the ruling coalition stepped down to pave the way for Anwar's return.

But he campaigned hard to secure the multi-racial constituency, promising voters development, clean government and a boost to local tourism.

Anwar did not discuss the sodomy accusations on the campaign trail. He has always maintained the charges were trumped up to derail his political career.

But he has campaigned doggedly on the multi-billion-dollar graft scandal at state fund 1MDB, which led to dozens of corruption charges against former leader Najib and his wife Rosmah Mansor.

Both face the prospect of spending the rest of their lives in jail in a scandal that saw Najib's coalition lose office for the first time since the country declared independence from Britain in 1957.

Political heavyweights including Mahathir have campaigned for Anwar during a comeback that was unthinkable even six months ago.

The duo went onstage together at one campaign event, prompting wild cheers from supporters.

After he was dumped as finance minister and jailed in the 1990s, Anwar led a reformist opposition movement while fighting to overturn his convictions.

Mahathir, his mentor turned tormentor and now ally, came back from retirement to lead the Alliance of Hope coalition that won power in May.