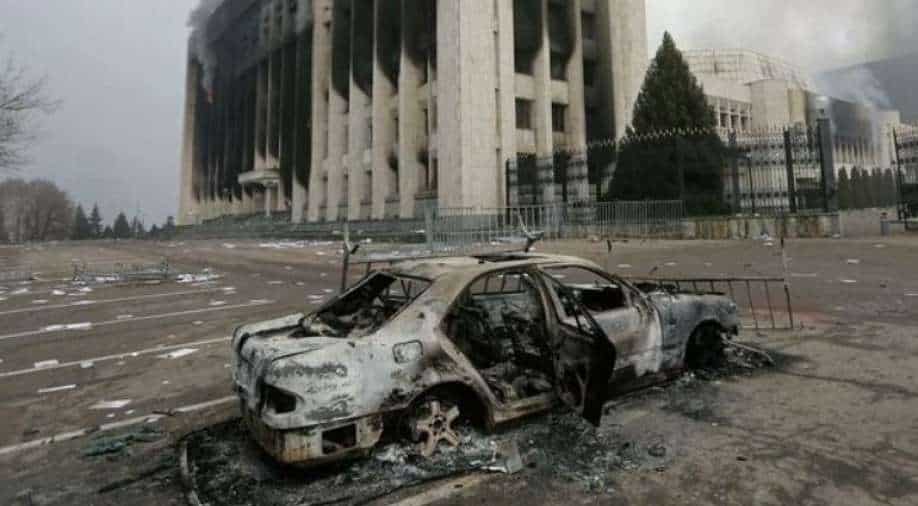 A burned car is seen in front of the mayor's office building, which was torched during protests triggered by fuel price increases in Almaty, Kazakhstan, January 6, 2022.  Photograph:( Reuters )

According to Tokayev, at least 20,000 gunmen attacked Almaty. He said that the armed rioters were trained and coordinated by one centre and that the terrorists would be eliminated if they refused to surrender.

Kassym-Jomart Tokayev, the president of Kazakhstan, announced on Friday that he has instructed the military and law enforcement agencies to use lethal force against terrorists, firing without warning.

In a televised address to the nation, Tokayev said, "I gave the order to law enforcement agencies and the army to open fire to kill without warning."

He also blasted calls for talks with the protesters made by some other countries as "nonsense." "What negotiations can be held with criminals or murderers?" Tokayev said.

Also read | Those who don't shun violence will be killed, says Kazakh govt as 18 troops die

According to Tokayev, at least 20,000 gunmen attacked Almaty. He said that the armed rioters were trained and coordinated by one centre and that the terrorists would be eliminated if they refused to surrender.

The president also blamed "so-called" independent" media" and "foreign agents" for inciting the unrest, and vowed to retaliate harshly if law and order were violated.

Tokayev congratulated Russian President Vladimir Putin for responding quickly to his request for peacekeepers, emphasising that the CSTO forces will only be in the country for a limited period of time.

He also stated that the authorities were aware of peaceful protestors' demands before the riots erupted and announced reforms, stating that he will deliver a statement on the current crisis in the nation's parliament on January 11th.

The country's mass protests began in early January, when citizens took to the streets to protest rising petrol prices.

The disturbance subsequently expanded to neighbouring cities, culminating in looting, burning, and vandalism, as well as violent fights with the police.

Hundreds of people rushed to the mayor's office and the ancient presidential mansion in Almaty, Kazakhstan's old capital and largest city.

Multiple instances of attacks on police officers and troops have surfaced.

Tokayev requested aid from the Collective Security Treaty Organisation (CSTO), which is sending peacekeeping personnel to defend critical objects in the country, in order to stop the bloodshed.