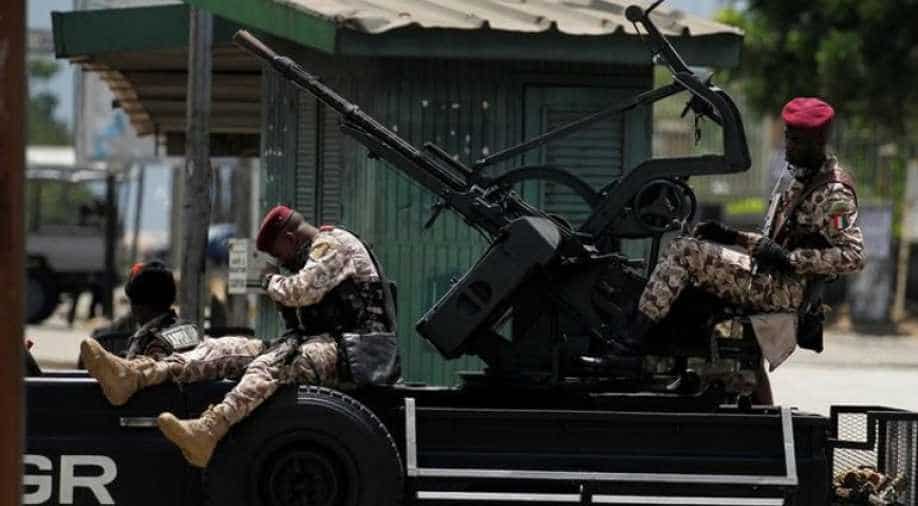 Soldiers of Ivory Coast presidential guard take position in front of mutinying soldiers in the centre of the commercial capital Abidjan, Ivory Coast on May 12. Photograph:( Reuters )

Armed men in uniform and in civilian clothes blocked the main highway leading north out of Ivory Coast's main city, Abidjan, on Monday forcing vehicles to turn back, witnesses said, as a nationwide army mutiny in its fourth day gathered pace.

Gunshots rang out early Monday in the Ivory Coast cities of Abidjan and Bouake amid a mutiny by ex-rebel soldiers demanding government bonuses, AFP journalists and witnesses said.

In Abidjan, gunfire was heard at two military camps in Akouedo in the east of the city, which together form the country's largest military barracks, a nearby resident said.

Ivory Coast's banking association, the APBEF, ordered all banks in the West African nation to remain closed on Monday amid worsening unrest linked to a four-day nationwide army mutiny. Shots were also heard from the Gallieni camp in the centre of the city. The African Development Bank advised its employees in Abidjan to stay at home as "the security situation" was " not clear for the moment."

Sustained gunfire also rang out in the second-largest city of Bouake, where one person died on Sunday from bullet wounds. Access roads into Akouedo were closed, preventing residents from the east of Abidjan from entering the city, an AFP reporter said.

The armed forces chief of staff, General Sekou Toure, said in a statement Sunday that "a military operation is underway to re-establish order" and made a televised appeal to the disgruntled soldiers to return to barracks.

Under a deal negotiated with the government in January after a mutiny by the ex-rebels, they were to be paid bonuses of 18,000 euros each, with an initial payment of five million francs that month.

The remainder was to be paid starting this month, according to rebel sources. But the government has struggled to pay the soldiers the promised money.

In Bouake, the mutinous former rebels were in control late on Sunday and appeared determined to press on with their protest despite the threat of sanctions by military chiefs.

"We want the money, that's all! There's nothing to discuss," said one of them.  Bouake was the epicentre of the January mutiny, which triggered months of unrest.

The city served as rebel headquarters after a failed 2002 coup which split Ivory Coast in half and led to years of unrest. The world's top cocoa producer and former star French colony has since been slowly regaining its credentials as a West African powerhouse and a haven of peace and prosperity.

The current round of trouble began when on Thursday a soldier presented as a spokesman for some 8,400 former rebels said in a televised ceremony that they wished to apologise to President Alassane Ouattara for the mutiny and were giving up their demand for huge payouts.

But this seemed to be viewed with scepticism by many of the former fighters. "We don't know if the delegates who were sent to Abidjan (for the ceremony) betrayed us, if they are corrupt or if they were taken hostage over there," said one mutineer in Bouake, Sergeant Yacouba Soro.

"But we have not renounced, that's clear."

Ivory Coast has an army of around 22,000, but falling cocoa prices have severely crimped the government's finances.

Last year, the government unveiled an ambitious plan to modernise the military, part of which would involve the departure of several thousand men, particularly ex-rebels, who will not be replaced.