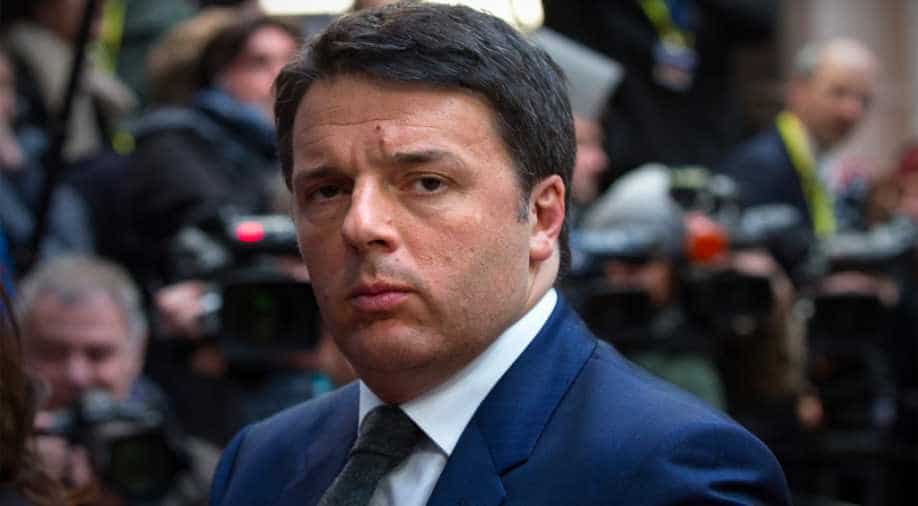 Renzi, who has been trying to turn around a plethora of opinion polls showing a lead for "No", said voting "Yes" would "give Italians the possibility to write a page of history". Photograph:( Getty )

With his career on the line, Prime Minister Matteo Renzi made a final appeal to Italians on Friday to support a crucial referendum to change the constitution, saying Italy could become Europe's strongest nation if it wins.

"(This Sunday) could change the lives of our children," he told a large rally in his home city of Florence.

"It is not for us, it is not for a political party, it is for them," he said at the end of a frenetic day of campaigning that included numerous media events and public rallies.

Financial markets and European political leaders fear victory for the opposition "No" camp in Sunday's vote could trigger political instability and renewed turmoil for Italy's battered banks, pushing the euro zone towards a fresh crisis.

Renzi has promised to resign if Italians reject his plan to drastically reduce the role of the upper house Senate and claw back powers from regional authorities.

The opposition says the reform will reduce vital democratic checks and balances.

Renzi, who has been trying to turn around a plethora of opinion polls showing a lead for "No", said voting "Yes" would "give Italians the possibility to write a page of history".

"If 'Yes' wins, Italy will become the leader of Europe," said Renzi, who has pledged to immediately veto the European Union's budget to force Italy's partners to give it more help in handling an influx of migrants arriving on its shores.

If Renzi is defeated, he is expected to go to President Sergio Mattarella at the Quirinale Palace, a ritual for a prime minister about to resign.

Mattarella might try to convince him to stay in office to guarantee political stability, officials have said.

Hours before Renzi spoke in Florence, Beppe Grillo, founder of the anti-euro 5-star Movement which backs a "No" vote, thundered against the political establishment at a rally in the northern industrial city of Turin.

"We are a country that is stuck in the mud," the former comedian told thousands of people.

MOST BETS ON "NO"

A blackout on the publication of surveys was imposed on Nov. 18, but private polls are still being carried out and bookmakers say the "No" camp remains the clear favourite to win.

Economy Minister Pier Carlo Padoan sought to calm nervous markets, saying in a newspaper interview that there was "no risk of a financial earthquake" if "No" wins, though there may be "48 hours of turbulence".

European shares fell to a three-week low on Friday as investors stayed cautious ahead of Italy's vote, with Milan's blue chip index off 0.75 per cent.

The bond market was more sanguine, with the gap between Italian and German 10-year bond yields, a key bellwether of investor sentiment, dipping to 165 basis points against a 2-1/2 year high of 190 points registered last week.

Market jitters have concentrated on Italy's banks, saddled with 360 billion euros ($380 billion) of bad loans, and most specifically on Monte Dei Paschi di Siena , its oldest and third largest lender.

The bank needs to raise 5 billion euros ($5.3 billion) by the end of the year to plug a capital shortfall or risk being wound down.

Government officials say potential investors may be deterred by political instability if 'No' wins on Sunday.

With bookmakers odds suggesting a roughly 75 per cent chance of a win for "No", speculation is rife on what Renzi will do in the event of defeat.

Renzi has said he will play no role in any unelected, so-called "technical" government, which Mattarella may try to put in place. Some of his allies have urged him to stay in power regardless of the result.