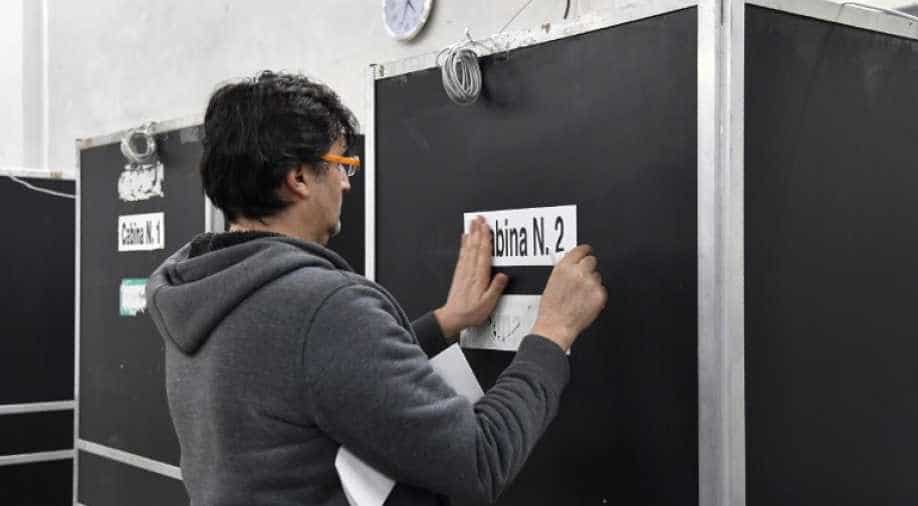 A man prepares a voting booth at a polling station in downtown Rome on March 3. Photograph:( AFP )

Italians vote on Sunday in one of the country's most uncertain elections ever, with far-right and populist parties expected to make major gains and Silvio Berlusconi set to play a leading role

Italians began voting on Sunday in one of the country's most uncertain elections ever, with far-right and populist parties expected to make major gains and Silvio Berlusconi set to play a leading role.

Clashes between far-right and anti-fascist activists have marred a gloomy campaign dominated by fears about immigration and economic malaise.

"It's been a very negative campaign," said Domenico Coricelli, a 28-year-old in Florence.

Many Italians are cynical about election promises made by the country's many squabbling parties and confused about what the outcome might be.

"We hope something will change because until now things have been very bad," said Enzo Gallo, an elderly shopper at a street market in Milan.

"The middle class no longer exists, the poor are becoming poorer, the rich are becoming richer and there is no social justice," he told AFP.

The last opinion polls before the vote put Berlusconi's coalition in the lead with 37 percent, followed by the Five Star Movement with 28 percent and the centre-left with 27 percent.

But under a new electoral law being tried out for the first time, any grouping would need at least 40 percent of the vote to command an overall majority of seats in both chambers of parliament.

"These elections are a lottery. It's been the case before but never like today," said Roberto D'Alimonte, head of political science at Rome's Luiss University.

Polls opened at 0600 GMT and will close at 2200 GMT with initial results expected early on Monday.

A remarkable feature of the election has been the return to the limelight of 81-year-old Berlusconi, despite a political career overshadowed by sex scandals and legal woes.

The billionaire tycoon cannot himself hold office because of a tax fraud conviction but has put forward European Parliament President Antonio Tajani as his prime ministerial nominee.

Berlusconi's plans, however, face a challenge from his ambitious coalition partner, League leader Matteo Salvini, whose anti-immigration and eurosceptic rhetoric has fired up the campaign.

Salvini has said he should be nominated prime minister if his party comes ahead of Berlusconi's and their coalition as a whole wins a majority.

Berlusconi and Salvini have promised to expel 600,000 illegal migrants from Italy if they win power -- a proposal that the centre-left has dismissed as logistically impossible.

The election has drawn international attention, including from former White House adviser Steve Bannon -- the man who harnessed the populist insurgency that propelled Donald Trump to power.

Italy's election "epitomises everything, it is pure populism," Bannon said in an interview with the New York Times last week.

Bannon, who is visiting Italy as part of a European tour, told the paper: "The Italian people have gone farther, in a shorter period of time, than the British did for Brexit and the Americans did for Trump".

He called a potential alliance between the Five Star Movement and the League -- a scenario that has spooked financial markets and European capitals -- the "ultimate dream".

Democratic Party leader Matteo Renzi told a final campaign event in his native Florence on Friday that only a vote for his party would prevent Salvini from taking power.

"The Democratic Party is the only serious political force that can bring concrete results," Chiara Serdone, a 70-year-old retired railway company employee, told AFP at the rally.

If no party wins an overall majority, one scenario outlined by analysts could be a grand coalition between the Democratic Party and Forza Italia -- a prospect that would reassure investors but risks spreading more cynicism and emboldening populists and the far-right.

Another possibility could be a temporary government and eventually new elections.

The anti-establishment Five Star Movement, which has drawn support from Italians disillusioned with traditional parties, may end up as the single biggest party but has ruled out any post-election deals with the others.

Five Star's leader Luigi Di Maio broke with tradition by announcing a full list of ministerial nominees ahead of the vote, including many academics with no political experience.

The 31-year-old Di Maio told supporters: "Some people have mocked this decision but we will be the ones laughing on Monday."