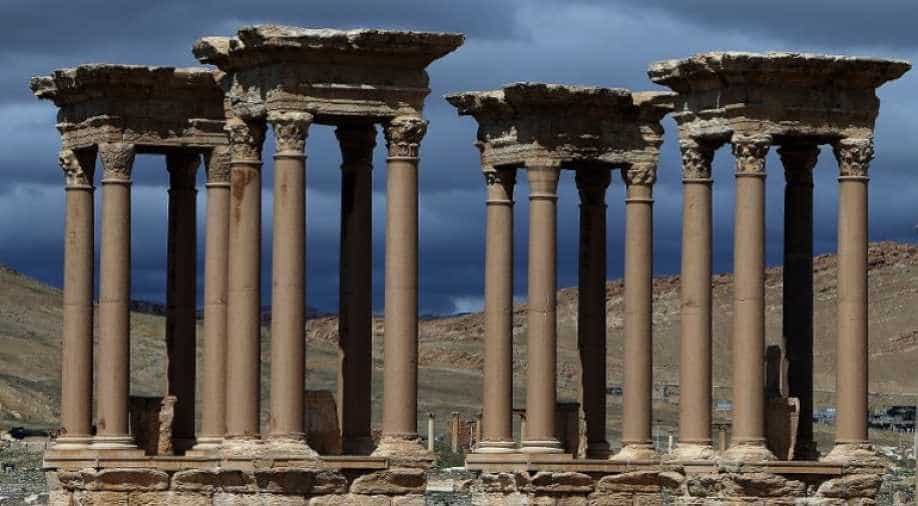 The Tetrapylon is one of the most famous monuments in the ancient city of Palmyra. Photograph:( AFP )

Islamic State militants have destroyed one of the most famous monuments in the ancient city of Palmyra, the Tetrapylon, and the facade of its Roman Theatre, Syrian antiquities chief Maamoun Abdulkarim told Reuters on Friday.

The Syrian government lost control of Palmyra to Islamic State in December, the second time the jihadist group had overrun the UNESCO world heritage site in the six-year-long Syrian conflict.

The Tetrapylon, marking a junction along Palmyra's grand colonnade, comprises a raised stone platform with matching structures of four columns positioned at each of its corners.

Satellite imagery sent by Abdulkarim to Reuters showed it largely destroyed, with only four of 16 columns still standing and the stone platform apparently covered in rubble.

The imagery also showed extensive damage to monuments on the stage of the Roman Theatre, with several towering stone structures apparently also destroyed.

Abdulkarim said if Islamic State remained in control of Palmyra "it means more destruction". He said the destruction took place sometime between Dec. 26 and Jan. 10, according to the satellite imagery of the site.

Islamic State had previously captured Palmyra in 2015, and held it for 10 months until Syrian government forces backed by allied militia and Russian air power managed to drive them from the city last March.

During its previous spell in control of Palmyra, Islamic State destroyed other monuments there, including its 1,800-year-old monumental arch. Palmyra, known in Arabic as Tadmur, stands at the crossroads of the ancient world.