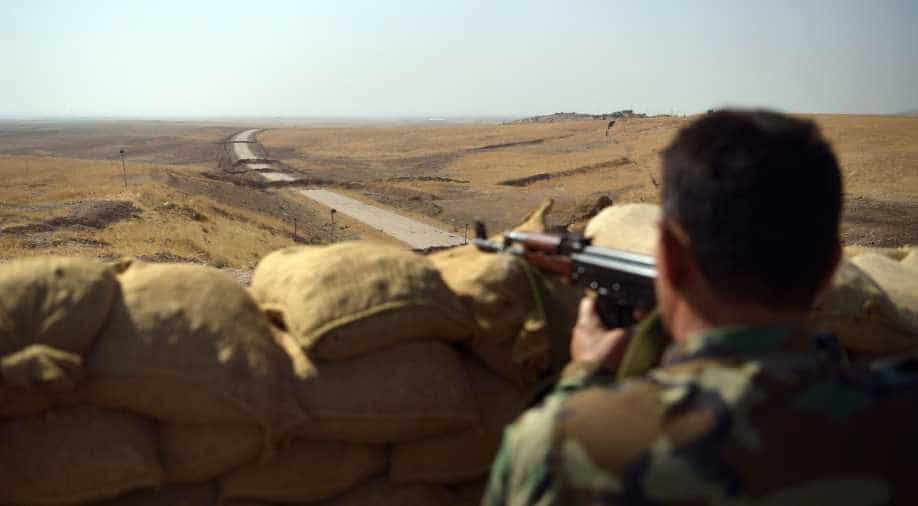 The autonomous Kurdistan Regional Government (KRG) suggested on Wednesday it would try to expand the area it rules in northern Iraq to include surrounding villages and towns captured by Kurdish fighters from Islamic State. Photograph:( Getty )

Iraqi Shi'ite militias said on Wednesday they had driven Islamic State fighters from an air base west of Mosul, a victory which would threaten the Sunni group's supply route from Syria to its last major stronghold in Iraq.

"The airport of Tal Afar has been liberated," Yusif al-Kallabi, a spokesman for Popular Mobilisation, a coalition of mainly Iranian-backed militias, told Iraqi state TV.

The capture of the base, if confirmed, could be a significant development in the campaign to recapture Mosul, Islamic State's de facto capital since its forces swept through Iraq in 2014 and set up a self-declared caliphate in a swathe of Syria and northern Iraq.

Tal Afar lies about 60 km (38 miles) west of Mosul on the main road to Syria. Its seizure could also alarm Turkey, which is wary of Iraqi Shi'ite involvement in the civil war in Syria.

"Tal Afar will be the starting block for the liberation of all the area...to the Syrian border and beyond the Syria border," said Hadi al-Amiri, head of Badr Organisation, Popular Mobilisation's largest component, in a video clip.

While the Shi'ite coalition is fighting Islamic State west of Mosul, regular army and police units are trying to advance from the other sides, backed by Kurdish Peshmerga fighters deployed in the north and the east.

Iraqi counter-terrorism forces breached Islamic State defences in east Mosul two weeks ago but have faced resistance from the militants, who have fought back with suicide car bombs, snipers and waves of counter-attacks.

The campaign that began on Oct. 17 with air and ground support from a U.S.-led coalition is the biggest military operation in Iraq in more than a decade of turmoil unleashed by the 2003 invasion that toppled Saddam Hussein.

Popular Mobilisation, known locally by its Arabic name Hashid Shaabi, has said it plans to use Tal Afar base to take the battle against Islamic State into Syria, fighting on the side of President Bashar al-Assad, an ally of Iran.

Although it officially reports to Iraqi Prime Minister Haider al-Abadi, it is mainly trained and equipped by Iran.

Popular Mobilisation's advance towards Tal Afar, which had a mixed population of mainly Shi`ite and Sunni Turkmen before Islamic State captured it in 2014, has raised the prospect of sectarian strife and alarmed neighbouring Turkey.

Turkish President Tayyip Erdogan said last month that Turkey was reinforcing its troops on the border with Iraq and would respond if the militias "cause terror" in Tal Afar.

Iraq's Abadi has sought to calm fears that the operation to recapture Tal Afar would ignite sectarian tension or escalate problems with Turkey, saying the attacking force that would enter the town will reflect its religious and ethnic make-up.

Kurds may keep territory
The autonomous Kurdistan Regional Government (KRG) suggested on Wednesday it would try to expand the area it rules in northern Iraq to include surrounding villages and towns captured by Kurdish fighters from Islamic State.

Barzani's comment could rile the central government in Baghdad, which opposes his plans to expand the autonomous area, even though the two sides have been fighting together against Islamic State in Mosul.

The collapse of the Iraqi army two years ago in the face of Islamic State allowed the KRG to extend its rule over the oil-rich region of Kirkuk.

The government forces have been fighting in a dozen of the roughly 60 neighbourhoods on the eastern part of Mosul, which is divided by the Tigris River. They have yet to enter from the northern and the southern sides.

Iraqi officials say the militants have used the city's more than one million remaining residents as human shields, firing from rooftops of inhabited houses and using a network of tunnels to launch ambushes in the midst of residential areas.

While the presence of civilians has slowed the advance, Iraqi officials say some of their operations have been assisted by information provided by residents about Islamic State military positions.

Trying to stop the flow of any information out of Mosul, the militants have cracked down on communications, banning the use of mobile phones and also confiscating satellite dishes to prevent people from seeing the progress made by Iraqi forces.

The group has also killed civilians suspected of helping the attacking forces, sometime putting their bodies on display around the city.

Iraqi military estimates put the number of Islamic State fighters in the city at 5,000 to 6,000. Facing them is a 100,000-strong coalition of Iraqi government forces, Kurdish fighters and Shi'ite paramilitary units.

Iraqi authorities have not published a casualty toll for the campaign overall - either for security forces, civilians or Islamic State fighters. The warring sides claim to have inflicted hundreds of casualties in enemy ranks.

Nearly 57,000 people have been displaced because of the fighting from villages and towns around the city to government-held areas, according to U.N. estimates.

The figure does not include the tens of thousands of people rounded up in villages around Mosul and forced to accompany Islamic State fighters to cover their retreat towards the city.