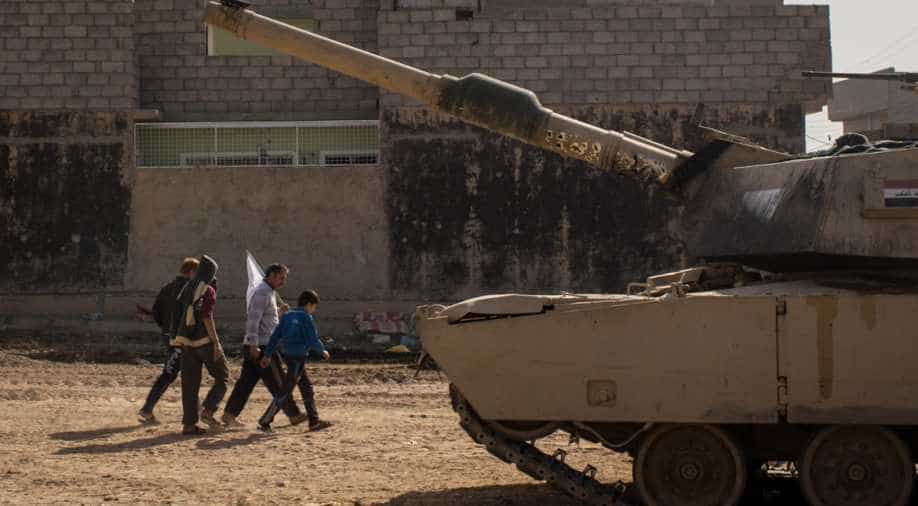 Civilians hold a white flag as they pass an Iraqi Army tank on the frontline in the Intisar neighbourhood on November 13. Photograph:( Getty )

Iraqi army Lieutenant General Abdul Ameer Rasheed Yarallah stated on a local channel that his troops reached Salam Hospital, located in a south-east neighbourhood of Mosul, the last stronghold of the Islamic State in Iraq.

The hospital is approximately one kilometre away from the Tigris river, which flows through the city. If the Ninth Armoured Division of the Iraqi army will fully secure the area, it will be their most advanced post.

The vicinity to the river opens the possibility of attacking the southern-most of the five bridges connecting the eastern and the western part of Mosul. An eventual success will result in the direct control of a key access point to the western part of the city, currently under control of the remaining Islamic State fighters.

The other bridges have been targeted with airstrikes, mainly aimed at destroying the roads leading to them, but according to local witnesses IS' bulldozer works to repair the damages. "I saw Daesh (Islamic State) using bulldozers to fill the craters with sand and by mid-day, vehicles managed to cross the bridge normally. I drove my car to the other side of the bridge and saw also Daesh vehicles crossing," a taxi driver told Reuters.

Avoiding the total destruction of the five bridges is also in the anti-Islamic State coalition interest. In the light of further advances, reconquering them in an intact or semi-intact status will give the Iraqi army the possibility to immediately use them, without deploying and exposing troops for reconstruction works.

Despite the pace of the advance, the battle to reconquer Mosul is far from ending. There are no official figures, but it is estimated that nearly one million citizens are still in the city while the Iraqi forces are engaged in a house-to-house battle against an organisation which is willing to fight till the very end. Western Mosul appears also to be more densely populated than the eastern part.

There are no official figures about the number of Islamic State terrorists fighting in Mosul, but both coalition forces and the Iraqi army believe their enemy to be close to 3,000 fighters.

The Islamic State takes little care of the local population and an increasing number of civilians is being either deliberately targeted or forced to stay. Furthermore, the unconventional warfare that IS uses means it makes no distinction -- improvised explosive devices and car bombs can hit anyone.

On Thursday,  Lieutenant General Abdul Ameer Rasheed Yarallah declared that during the 45 days of the Mosul offensive, the Islamic State used as many as 632 car bombs, an average of fourteen a day.

Brigadier General Scott Efflandt, a coalition deputy commander, seems to be optimistic. "The quality of the enemy we are facing now has markedly declined from a month ago," he said. "What they were saving for the west side of the river, they are now committing to the east."