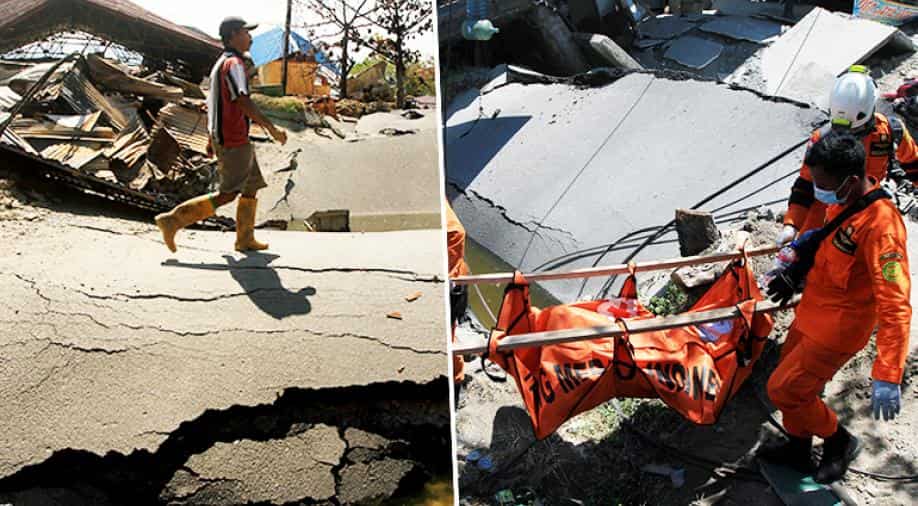 Most of the death has been reported in Palu.

Rescue operations were hampered in earthquake-hit Sulawesi island in Indonesia as several hundred were still feared trapped in rubble after a massive 7.5 magnitude earthquake followed by tsunami devasted homes and families on Friday night.

Factbox: Earthquakes and tsunamis in Indonesia

The confirmed death toll stands at 844, rescue operators said even as medical team and disaster teams continued to reach areas hit by the massive tsunami with a 14-day state of emergency already announced.

The United Nations estimates that at least 191,000 people need urgent help after the earthquake.

Dozens of people were reported to be trapped in the debris of several hotels and a mall in Palu, near Jakarta. Reports said communications is still cut off in Donggala in Sulawesi which is close to the epicentre where rescuers still haven't reached. The island is home to at least 300,000 people. Sulawesi is known to be an earthquake-prone area.

Most of the deaths have been reported in Palu. Authorities fear the toll may rise further.

The disaster agency said more heavy equipment and personnel were needed to recover bodies. The earthquake has displaced at least 48,000 people, reports said with rescuers still unable to reach remote areas affected by the quake.

President Joko Widodo has requested for international help due to the scale of the disaster. The president said the government will ensure improvement to damaged facilities, heavy equipment delivery, fuel supply and better communication.

"This is indeed an emergency situation, same as in Lombok, there will be stages, moments, one or two days it will feel tough, really tough here. The road to the location is mostly cut off, even the airport is not running functionally," the president said.

Indonesia which is situated in the area called the "Ring of Fire" prone to earthquake. The 2004 tsunami was triggered in Indonesia which killed at least 220,00 people.