I think our core values may be at stake: Obama 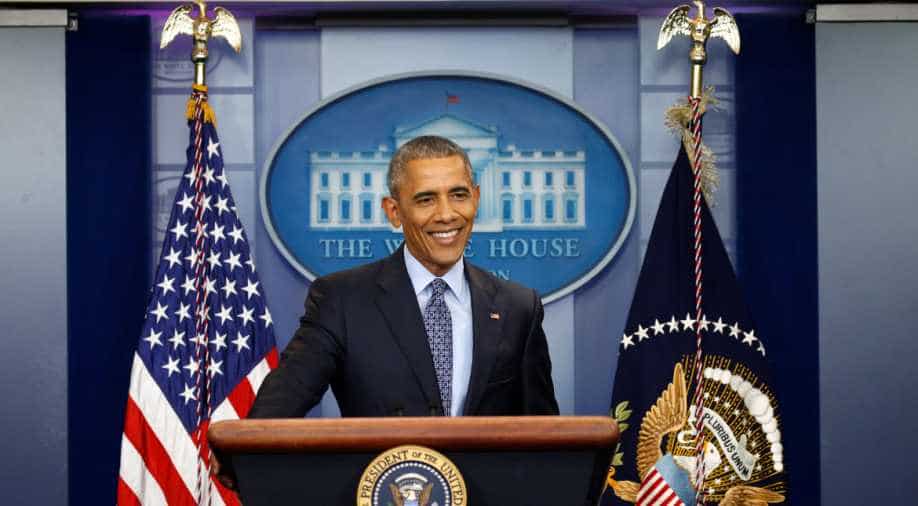 Obama reassured the American public that 'we'll be okay' and said he advised Trump that he cannot do the job alone and must rely on his team. Photograph:( Reuters )

Outgoing US President Barack Obama's final press conference took on a political edge as he promised to raise his voice if President-elect Donald Trump disrupts core values and assured Americans, "we'll be okay".

The 55-year-old said he wanted to do some writing and spend time with his daughters, but he will speak out if he saw "systematic discrimination being ratified in some fashion. I put in that category explicit or functional obstacles to people being able to vote, to exercise their franchise."

"There's a difference between that normal functioning of politics and certain issues or certain moments where I think our core values may be at stake," Obama told reporters.

Reassuring the American public, Obama said, "I have offered my best advice," to Donald Trump.

"I can tell you that -- this is something I have told him -- that this is a job of such magnitude that you can't do it by yourself. You are enormously reliant on a team."

He also warned Trump to think well before deciding foreign policy, which may be popular at home but could have consequences.

"It's a volatile environment. What we have seen in the past is when some unilateral moves are made that speak to some of the core issues and sensitivities of either side, that can be explosive."

He also defended his decision to commute the sentence of transgender army private Chelsea Manning, who was serving a prison sentence of 35 years for leaking classified documents to WikiLeaks.

"Let's be clear. Chelsea Manning has served a tough prison sentence," Obama said. "I know I feel very comfortable that justice has been served and that a message has still been sent."

Obama's decision was slammed by Republicans who have accused Manning of being a traitor.

When asked about Trump's intention to mend ties with Russia, Obama said it was "in America's interest and the world's interest."

However Putin's "adversarial spirit" had "made the relationship more difficult," Obama said. Obama's administration had imposed sanctions on Russia in 2014 after Putin's forces annexed the Crimea peninsula from Ukraine.

"Russia continues to occupy Ukrainian territory and meddle in Ukrainian affairs," Obama told reporters. "I think it would probably best serve, not only American interests, but also the interests of preserving international norms if we made sure that we don't confuse why these sanctions have been imposed with a whole set of other issues," he said.

"It is important for the United States to stand up for the basic principal that big countries don't go around and invade and bully smaller countries," the Democratic president added.

President-elect Trump has said he wants to improve ties with Russia, despite allegations by US intelligence agencies that Russian President Vladimir Putin ordered a cyber campaign to boost Trump's campaign against Democrat Hillary Clinton. Moscow has denied the allegations.

Obama said a more "constructive relationship" with Russia would be a good goal. The United States and Russia are by far the world`s biggest nuclear powers.

"If President-elect Trump is able to restart those talks in a serious way, I think there remains a lot of room for our two countries to reduce our stockpiles," Obama said.

Voicing his support for the White House press corps, he said, "We are accountable to the people who send us here. And you have done it," Obama said. "You're not supposed to be sycophants. You're supposed to be skeptics ."

Trump who has had a contentious relationship with the media, suggested evicting the White House press corps from the West Wing, putting an end to daily press briefings and access.