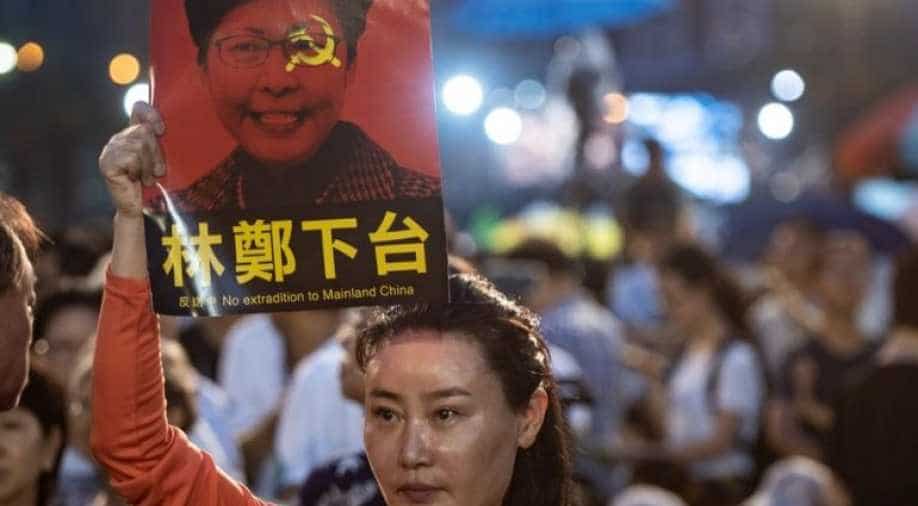 The semi-autonomous financial hub has been thrown into crisis by weeks of massive demonstrations over a push to pass a bill that would allow extraditions to the Chinese mainland.

Hong Kong's leader on Tuesday condemned "the extreme use of violence" by masked protesters who stormed and ransacked the city's legislature in an unprecedented challenge to Beijing's authority.

The semi-autonomous financial hub has been thrown into crisis by weeks of massive demonstrations over a push to pass a bill that would allow extraditions to the Chinese mainland.

But on Monday -- the 22nd anniversary of the city's handover to China -- anger spilled over as groups of mostly young, hardline protesters, broke into the legislative council.

They hung the city's colonial-era flag in the debating chamber, scrawled messages such as "Hong Kong is not China" and defaced the city's emblematic seal with spray-paint.

Police charged into the building shortly after midnight, firing tear gas and sending plumes of smoke into the air.

The events pose an unparalleled challenge to Chinese leader Xi Jinping, who has so far left Lam to handle the protests.

In a pre-dawn press conference, Lam, the city's Beijing-appointed chief executive, described the scenes of vandalism as "heartbreaking and shocking".

"This is something we should seriously condemn because nothing is more important than the rule of law in Hong Kong," she said, with the city's police chief Stephen Lo by her side.

The financial hub has been rocked by massive protests over the past three weeks as anger against the pro-Beijing government has boiled over.

The rallies -- including a huge pro-democracy march on Monday -- have been largely peaceful while calling for Lam, whose approval ratings are at a record low, to resign.

But they have failed to win many concessions, with Lam resisting calls to permanently shelve the extradition law or step down.

On Monday, some hardline protesters appeared to have reached breaking point, saying they felt compelled to storm parliament because their concerns were going unheard.

"We have marched, staged sit-ins... but the government has remained unmoved," Joey, a 26-year-old protester, told AFP as she walked over shattered glass inside the building.

"We have to show the government that we won't just sit here and do nothing."

The legislature was closed on Tuesday, as police inspected the damage inside the building while workers waited outside to begin a clean-up.

Under the terms of Hong Kong's handover from British to Chinese rule in 1997, the city enjoys rights and liberties unseen on the autocratic mainland. But many residents accuse Beijing of reneging on that deal with the help of unelected leaders.

On Monday, the United States voiced its support for the protesters, with President Donald Trump saying the demonstrators were "looking for democracy".

"Unfortunately, some governments don't want democracy", he added, in a swipe at China.

Britain's Foreign Secretary Jeremy Hunt said his country's support for Hong Kong and "its freedoms is unwavering" and urged restraint from protesters.