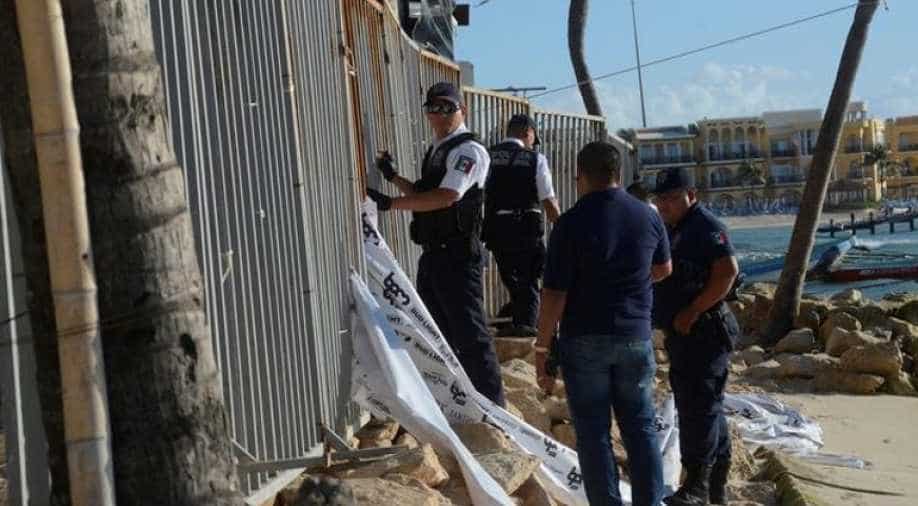 The gunman opened fire on security guards preventing him from entering the Blue Parrot nightclub during the BPM festival in Playa del Carmen. Photograph:( Reuters )

Shooting erupted during an electronic music festival at a Mexican beach resort early Monday, leaving five people dead, including one in a stampede as revellers fled in panic. Fifteen other people were injured after a gunman opened fire on security guards preventing him from entering the Blue Parrot nightclub during the BPM festival in Playa del Carmen, the Quintana Roo state, prosecutor's office said in a statement.

The prosecutor, Miguel Angel Pech, has confirmed that one Canadian - not two as previously thought - and one Italian were among the five dead. At least three of those killed were security personnel, according to event organizers.

The shooting sowed terror in a part of Mexico that has been largely spared from the drug violence afflicting other parts of the country. Playa del Carmen and nearby Cancun are in a Caribbean region known as the Mayan Riviera, which is popular among American and European tourists.

"We suddenly had to jump over the metal security barriers because they were shooting. It was horrible. We were very scared," Eric Alvarez, a 40-year-old Mexican DJ, said outside the club, which has a blue parrot painted on the facade.

"A lot of people were panicking," said Alvarez, who lost his prosthetic teeth while fleeing.

The Italian man was shot dead while another man died from bullet wounds at a hospital, according to local prosecutors. A woman was trampled to death. "Witnesses said that a person tried to enter the establishment with a weapon but was blocked by security guards, triggering the attack," said the statement from Pech's office.

Pech said two people, apparently security guards, had fired back at the assailant.

Four people were detained near the scene of the crime and authorities are investigating if they were connected to the shooting, he added. Rashed Qassem, a Lebanese events promoter who lives in the United States, said he was sitting at a table near the club's exit when the shooting started.

"We thought it was fireworks placed in the club. Then we realised that someone had entered through the exit door and had begun shooting," Qassem said. Qassem, 36, saw a man fall to the ground after he suffered a head wound. Then one of his friends was shot in the back.

"When it became clear that someone was shooting, everyone went into a state of panic. We immediately threw ourselves to the ground as the gunman continued shooting, after he killed a guard at the entrance," he said.

"He fired more than 10 times before he left via the exit door. We kept lying on the ground until the police arrived and asked us to leave."

Amateur video footage showed people cowering and running down the street. An editor for London-based music magazine, Mixmag, who was in the backstage area of the Blue Parrot said at least four or five shots were fired at around 3am local time.

"People started running because there's an exit in the back. We stopped and hid behind a cement wall, then crawled under a metal table," Valerie Lee, Mixmag's US digital editor, was quoted as saying by the magazine.

Lee wrote on Twitter that the music was so loud that people likely didn't hear the gunshots inside. She said friends outside the entrance were just 20 feet from the shooter and that there were "bodies on the ground." The Colombian foreign ministry said Quintana Roo authorities had informed them that "no citizens of Colombian nationality died in the shooting," as authorities had previously thought.