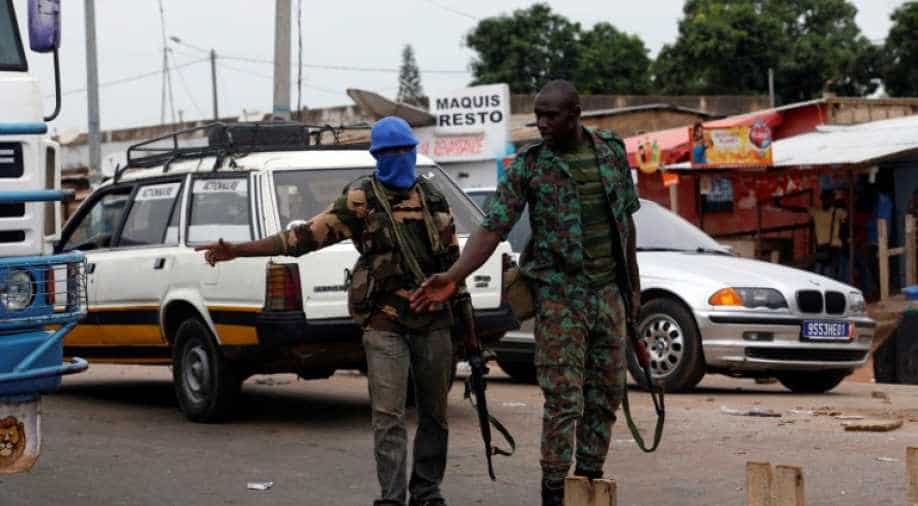 Ivory Coast is the world's largest producer and London cocoa futures climbed to a five-week high due to the unrest as businesses in the sector closed. Photograph:( Reuters )

Gunfire rocked cities in Ivory Coast on Monday as a mutiny by disgruntled soldiers gathered pace in defiance of government action against a revolt that threatens the country's rapid emergence from a civil war.

Ivory Coast is the world's largest producer and London cocoa futures climbed to a five-week high due to the unrest as businesses in the sector closed.

"The mutineers are in San Pedro. They are everywhere. There is heavy gunfire. Everyone is closing shop and heading home," said a cocoa exporter based in the city. Three other residents confirmed the gunfire.

Authorities will maintain a firm line with the mutiny, government spokesman Bruno Kone said. While there was no negotiations under way with the soldiers "discussions were continuing" and a military operation against them was ongoing.

The head of the army said on Sunday troops were being sent to Bouake to "re-establish order" but a Reuters team travelling from the capital Yamoussoukro towards the city, saw only a handful of loyalist military vehicles.

Most of the large column of troops spotted on Sunday evening appeared to have withdrawn, suggesting any government operation was not yet fully under way.

More than 200 commercial trucks were stranded on the roadside after mutinous soldiers sealed off the southern entrance to Bouake, on Monday, Reuters witnesses said.

Sporadic gunfire was heard overnight in Bouake as well as at military camps in the commercial capital Abidjan. Shooting in both cities intensified before dawn.

"There was heavy shooting at the northern entrance to the city and in the city centre. It's calmed a bit but we're still hearing gunfire," said one Bouake resident. Other residents confirmed the shooting.

The four-day-old revolt exposes divides in a society that emerged from a decade of political turmoil and a civil war in 2011 to become one of the world's fastest growing economies under President Alassane Ouattara.

The government promised bonus payments to the soldiers after a mutiny in January but not they were not fully paid after a collapse in the price of cocoa, Ivory Coast's main export, caused a revenue crunch.

The issue triggered a wave of mutinies that has exposed the lack of unity in a military assembled from former rebel and loyalist combatants.

In signs of the economic impact of the crisis, the banking association, the APBEF, ordered all banks to remain closed on Monday and many businesses at the port in Abidjan from which cocoa is exported were also closed.

Data from Tradeweb showed that Ivory Coast dollar bonds maturing in 2024 fell 0.8 cents in price to a three-week low while the 2028 issue lost 1.2 cents to hit its lowest level in 10 days due to the unrest.

A spokesman for the mutiny denied that any clashes occurred in Bouake and said the renegade soldiers were firing in the air to dissuade any advance on the city.

On Sunday, the group's leaders rejected the army's demand that they disarm and surrender.

"We can no longer turn back," said their spokesman Sergeant Seydou Kone. "We don't know what will happen to us, so we just want our money so we can start a new life. But we can't give up now that we've reached this point."

The 8,400 mutineers, most of them former rebels who said they were promised bonuses for fighting to bring Ouattara to power, received 5 million CFA francs ($8,400) each to end the January uprising, with more to come.

But the government has struggled to pay the outstanding bonuses of an extra 7 million CFA francs each. A spokesman for the group said on Thursday they had dropped demands for the remaining money. This was rejected by other soldiers, sparking the revolt.

An Abidjan resident said soldiers came out of the largest military camp and erected barricades early on Monday, blocking traffic along one of the city's eastern thoroughfares.

Several schools near the camp did not open and the Abidjan-based African Development Bank, which employs several thousand people - many of them international staff - told its employees to stay home.