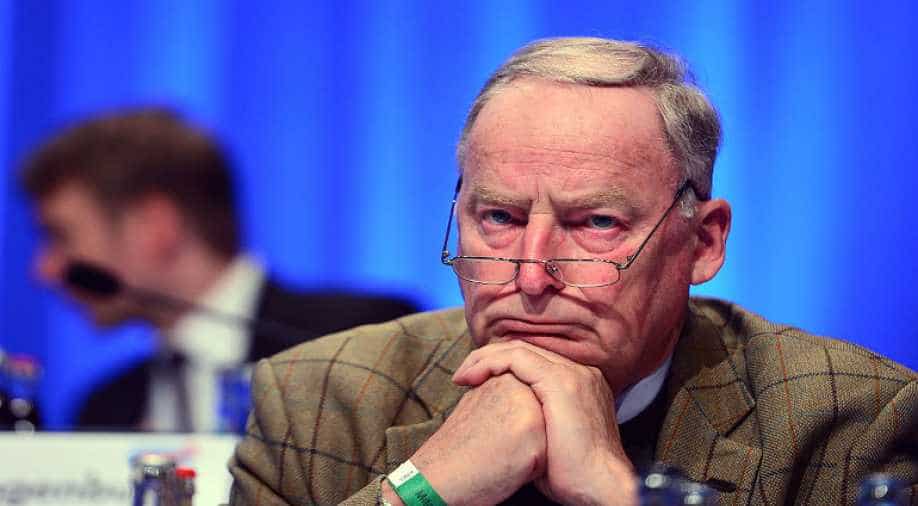 Follow Us
A regional lawmaker for the anti-immigrant Alternative for Germany (AfD) quit late on Tuesday after a row over his allegedly anti-Semitic views had threatened to cause a damaging split in the party.

Wolfgang Gedeon, a former doctor turned AfD lawmaker, triggered outrage by saying that denial of the Nazi Holocaust, in which six million Jews were killed, was a legitimate expression of opinion. Holocaust denial is a crime in Germany.

On Tuesday evening he said he hoped to prevent the split within the party by tendering his resignation from the parliamentary group following a meeting with AfD national leader Frauke Petry, according to German media reports.

The AfD has won growing popular support in Germany due in part to Europe's migrant crisis, which has seen more than a million refugees arrive in the country over the past year, and it now has seats in eight of Germany's 16 state assemblies.

Thirteen lawmakers from the anti-immigrant Alternative for Germany (AfD) in the southern German state of Baden-Wuerttemberg had earlier quit the AfD's regional parliamentary group after ten other members did not support a motion to expel Gedeon.

Joerg Meuthen, the leader of the AfD parliamentary group in Baden-Wuerttemberg and the party's co-chair at the national level, led Tuesday's split. He and 12 others left the regional parliamentary group, which originally comprised 23 lawmakers.

"Anti-Semitism cannot and must not have any place in the AfD," Meuthen said.

Meuthen said Gedeon's resignation did not change the fact that other members had supported him and was quoted by ARD public broadcaster as saying the split remained a "painful but necessary step".

The AfD parliamentary group had previously rejected an attempt by Meuthen for Gedeon to be expelled from the party. Instead, they suspended his membership pending an independent review of his written work.

The national leaders of the AfD said in a statement that there was no room for anti-Semitism in the party and criticised those in the state who resisted Gedeon's expulsion.

"The board distances itself from those members who do not leave the parliamentary group with Joerg Meuthen. From now on we recognise only Joerg Meuthen and the lawmakers who join him as representatives of the AfD in the Baden-Wuerttemberg assembly," said the board in a statement.

An INSA poll published on Tuesday put nationwide support for the AfD at 14.5 per cent, up 0.5 percentage points from the previous survey. Chancellor Angela Merkel's conservative bloc were on 30 per cent and her centre-left coalition partners, the Social Democrats, on 21 per cent.

In May, AfD Vice Chair Alexander Gauland caused a storm by saying Germans would not want to live next door to national soccer star Jerome Boateng, born in Berlin to a Ghanaian father.