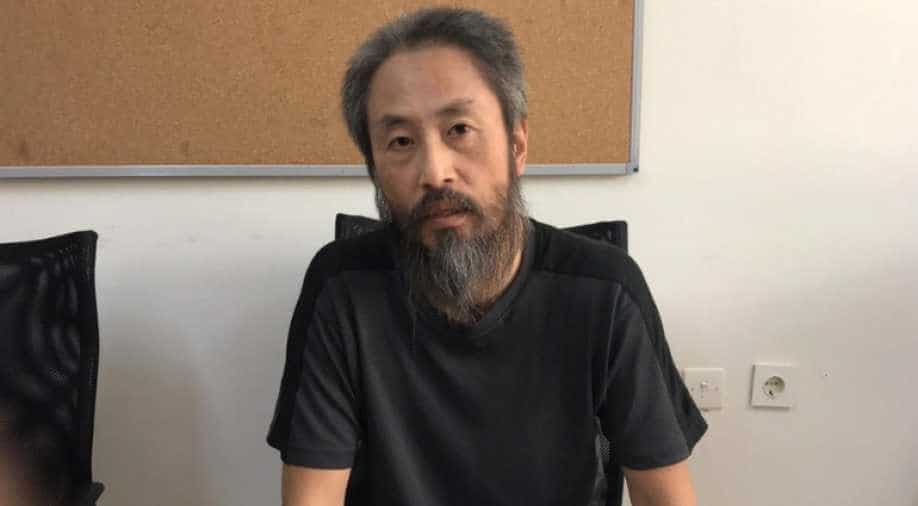 A Japanese journalist who was held in Syria for more than three years before being freed this week has described his lengthy captivity as "hell."

Jumpei Yasuda was freed earlier this week and taken to Turkey, where Japanese government officials confirmed his identity before announcing Wednesday that he was free.

He boarded a plane bound for Tokyo on Thursday, speaking briefly to journalists in an interview broadcast by Japanese media.

"It was hell," he said, sporting a long beard peppered with grey hair.

"Not only physically, but mentally as well. The thought each day that 'I'm not being released today either' left me losing control over myself bit by bit."

Yasuda, who is expected to arrive in Tokyo on Thursday evening, spoke calmly, but appeared slightly overwhelmed and tired, if otherwise healthy.

"For about 40 months, I have not spoken a word of Japanese. Words don't come to my mind easily," he said.

"I am happy that I am returning to Japan. At the same time, I have no idea what will happen now and how I should conduct myself. I am at loss and don't know what to think."

Yasuda was kidnapped in Syria in June 2015, and was reportedly initially a hostage of the group previously known as the Al-Nusra Front, a former Al-Qaeda affiliate.

But the group's current iteration, Hayat Tahrir al-Sham, denied any involvement in his kidnapping in a statement earlier this week.

There was only sporadic news of Yasuda throughout his captivity, including a bizarre video that emerged in August showing him and a man identified as an Italian called Alessandro Sandrini.

Both men appealed for their release, dressed in orange jumpsuits, as masked, armed men stood behind them.

Yasuda gave his name as Omar and described himself as South Korean, but his wife Myu confirmed that it was her husband in the video.

The video did not identify who was holding the men or what their demands were. There has been no word on the fate of Sandrini since.

Yasuda told journalists he believed he was held for all of his captivity in Idlib, a province in northwestern Syria that is one of the last parts of the country still held in part by rebels and jihadists.

The details of how Yasuda was freed have remained murky, with the Syrian Observatory for Human Rights, a Britain-based war monitor, saying a ransom was paid.

But Japan's government has denied that.

In 2015, militants from the Islamic State group beheaded Japanese war correspondent Kenji Goto and his friend Haruna Yukawa in Syria.

The Japanese government was criticised for what detractors saw as its flat-footed response to the crisis at the time, including apparently missed opportunities to free both men.

But other Japanese hostages who have been freed and made it home safely have also faced heavy public criticism for what some have deemed reckless behaviour.