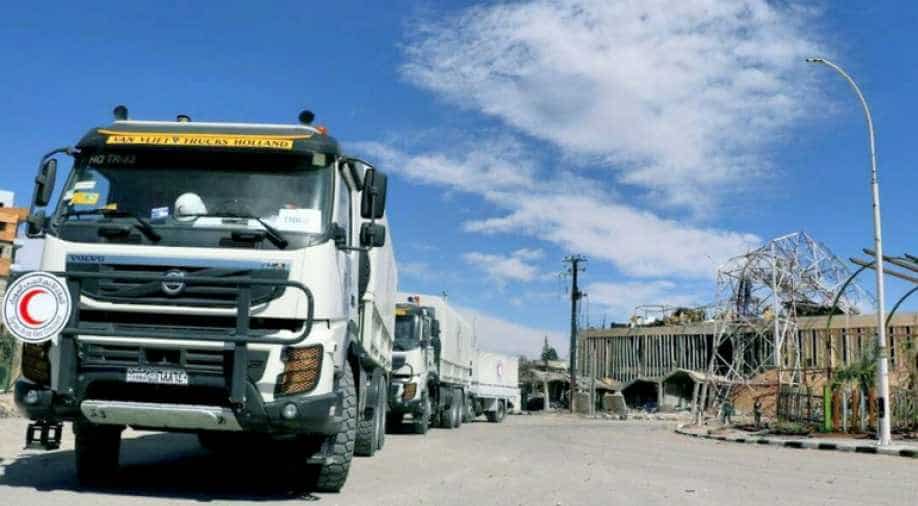 On Friday, a convoy of relief trucks crossed front lines into the rebel-held Damascus suburb of eastern Ghouta and unloaded all its food to the trapped population, despite fighting that the Red Cross said had come 'extremely close.' Photograph:( Twitter )

The first group of fighters surrendered their arms and were evacuated from Syria’s rebel-held Eastern Ghouta on Friday, as an aid convoy delivered food to the hunger-stricken residents of the enclave despite renewed bombardment.

Reports say that a group of 13 unarmed militants left Eastern Ghouta, along the humanitarian corridor opened in Muhayam al-Wafideen, Maj Gen Yuri Yevtushenko, the chief of the Russian center for reconciliation of warring sides in Syria, said on Friday.

Some appeared to be young, while others wore hoodies to cover their heads and faces.

The limited operation came as the powerful Jaish al-Islam said HTS fighters would be evacuated to the northern province of Idlib, in an arrangement struck following consultations with the United Nations and other international players.

“It has been agreed that the first group of HTS members be released from the prisons of Jaish al-Islam … (and) moved to Idlib at their request,” Jaish al-Islam said.

Jaish al-Islam said it had come to an agreement with a variety of parties, including the UN, to evacuate the fighters from Hayat Tahrir al-Sham (HTS) - an alliance of factions led by the Nusra Front, which sprung from al-Qaeda.

The Syrian government’s two-week onslaught in eastern Ghouta has killed around 950 civilians, the war monitoring group the Syrian Observatory for Human Rights said.

As per reports, the pro-government has taken over half the area.

Eastern Ghouta’s 400,000 inhabitants have lived under government siege since 2013 and the enclave — more than half of which has over the past three weeks been retaken by regime forces — is home to a myriad of armed groups.

On Friday, a convoy of relief trucks with 2,400 food parcels crossed front lines into the rebel-held Damascus suburb of eastern Ghouta and unloaded all its food to the trapped population, despite fighting that the Red Cross said had come “extremely close”.

For eastern Ghouta’s civilians, mostly trapped underground with little food or water, the choice of whether or not to emerge to seek supplies may be one of life or death.

“People were hopeful after the bombardment decreased and went out onto the streets,” said Moayad al-Hafi, a man in the Ghouta town of Saqba. “But then air strikes began again, and there are still people under the rubble that we couldn’t get out.”

#Now :@SYRedCrescent teams in cooperation with @ICRC and @UN enter #Eastern_Ghouta on Friday, March 9, 2018. They will carry out a delivery of a remaining of aid that wasn't offloaded during the previous convoy on 5th March. The #convoy carries 2400 food parcels, 3240 flour bags pic.twitter.com/DOTVItM4DQ

The aid was delivered as helicopters hovered overhead and warplanes targeted areas outside Douma, a correspondent said.