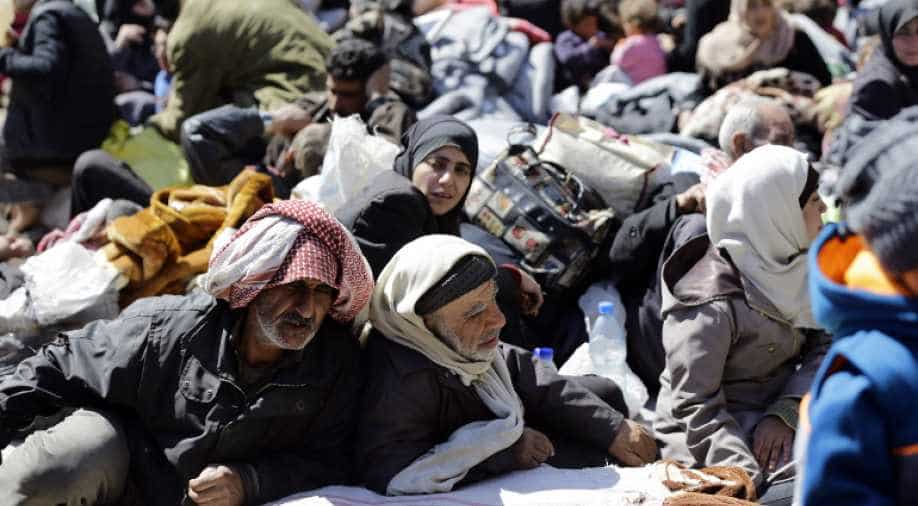 Syria's regime drew closer to taking full control of Eastern Ghouta on Monday as state media reported that fighters began evacuating from the last rebel-held pocket of the former opposition stronghold near Damascus.

A Russian-brokered deal had been reported on Sunday for fighters with Jaish al-Islam, the largest rebel group still in Ghouta, to leave the enclave's main town of Douma.

But the rebels have not yet confirmed the agreement, amid reports of divisions in the group as hardline fighters refuse to abandon their posts.

The retaking of Eastern Ghouta would mark a major milestone in President Bashar al-Assad's efforts to regain control of territory seized by rebel factions during Syria's seven-year civil war.

Assad's forces have retaken 95 per cent of Eastern Ghouta since launching a blistering air and ground assault on the besieged enclave on February 18, killing 1,600 civilians and displacing tens of thousands more.

State media on Monday said Jaish al-Islam fighters and their families had started leaving Douma, in preparation for them heading to a rebel-held town in northern Syria.

"A group of buses carrying a number of Jaish al-Islam terrorists and their families leave Douma in preparation of them being transported to Jarabulus," state news agency SANA said, using the government's term for all rebel fighters.

State television said six buses had left Douma, the only opposition holdout six weeks after the start of the offensive.

The rebels have been negotiating with Russia, a key ally of Assad, for days on an agreement to evacuate Douma.

Jaish al-Islam has previously said it would not leave Douma and the Syrian Observatory for Human Rights monitoring group reported divisions within its ranks.

"There are attempts to convince the hardline wing of Jaish al-Islam not to obstruct the agreement with the Russians," the head of the Britain-based monitor, Rami Abdel Rahman, said on Monday.

In video footage published by Jaish al-Islam online on Sunday, the group's leader told a group of men in a mosque he would stay.

"We will stay in this town and will not leave. Those who want to leave should leave," Essam al-Buidani says.

It was not immediately possible to verify when the video was filmed.

Backed by Russia, Assad's forces have scored a series of victories over rebel forces in recent years, often through campaigns of siege, aerial bombardment and ground offensives that have drawn widespread international condemnation.

Before February 18, some 400,000 people in Eastern Ghouta had lived under regime siege for five years, facing severe food and medicine shortages.

After pounding it with air strikes, regime forces have taken back most of the enclave through a combination of ground assaults and Russia-brokered evacuation deals.

In the past few weeks, these deals have seen more than 46,000 people - fighters and civilians - board buses with scant belongings to be driven to the northwestern province of Idlib, which is largely outside government control.

These include more than 1,000 people - fighters from another faction, Faylaq al-Rahman, and family members - who left Douma late Sunday, according to state media.

On Monday before dawn, an AFP correspondent saw men, women and children step off buses in the area of Qalaat al-Madiq in central Hama province, a common way station on the road to Idlib.

An old woman dressed head-to-toe in black stood by a pile of suitcases and a blanket, a child wearing a winter coat and colourful backpack by her side.

A man slung a gun over his shoulder as he picked up a travel bag, while a young boy, who appeared weak and unable to move his limbs, was carried into an ambulance.

A man in a long white robe walked on crutches, his weight on one leg only and a light weapon visible under his khaki jacket.

Syria's war has killed more than 350,000 people and displaced millions since starting in 2011 with the brutal repression of anti-regime protests.