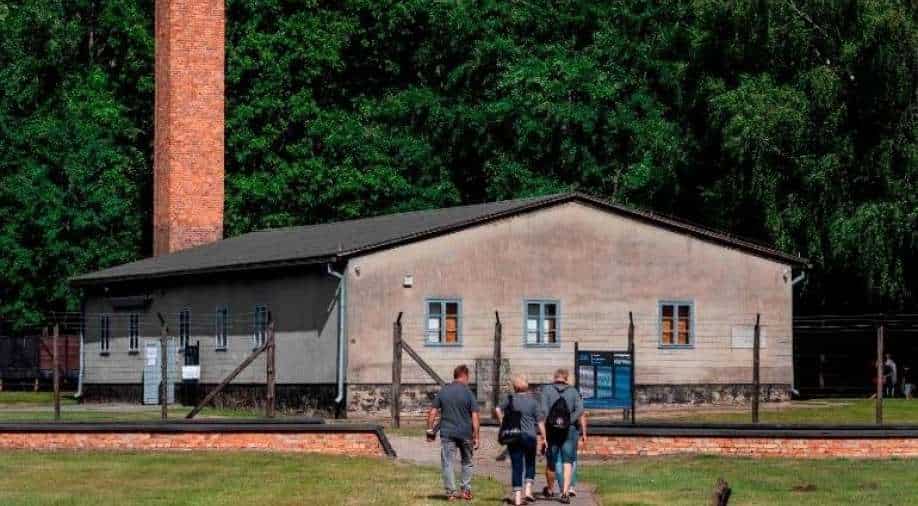 People visit the museum on the site of the former Stutthof Nazi concentration camp Photograph:( AFP )

The 95-year-old accused had worked at the Stutthof camp near what was Danzig, now Gdansk, in then Nazi-occupied Poland

German prosecutors said Friday they have charged a former secretary at a Nazi concentration camp with complicity in the murders of 10,000 people, in the first such case in recent years against a woman.

The 95-year-old accused had worked at the Stutthof camp near what was Danzig, now Gdansk, in then Nazi-occupied Poland.

Prosecutors did not name the woman, but regional broadcaster NDR identified her as Irmgard F., who now lives in an elderly care home in the north of Hamburg.

The suspect "is accused of having assisted those responsible at the camp in the systematic killing of Jewish prisoners, Polish partisans and Soviet Russian prisoners of war in her function as a stenographer and secretary to the camp commander" between June 1943 and April 1945, the prosecutors said in a statement.

The woman, who was a minor at the time of the alleged crimes, is charged with "aiding and abetting murder in more than 10,000 cases" as well as complicity in attempted murder, added prosecutors from the northern city of Itzehoe.

"Given that some inmates survived their stay in the camp despite the hostile conditions, some of the acts has to be assessed judicially as attempted murder," they added.

Investigators had carried out a "very elaborate" investigation including interviewing witnesses now living in the United States and Israel, spokesman for the prosecutor's Peter Mueller-Rakow said.

Historians have also been tasked with evaluating the scope of the accused's job in the camp, as a key question in the case is the "concrete responsibility" she had in the killings, said the spokesman.

It was now up to the court to decide whether to open a case, said Mueller-Rakow, adding that in the view of the prosecutors, the accused is able to stand trial.

Due to her age at the time of the atrocities, she will face a juvenile court.

Germany has been racing to bring to justice surviving Nazi staff after the 2011 conviction of former guard John Demjanjuk on the basis he served as part of the Nazi killing machine set a legal precedent.

Since then, courts have handed down several guilty verdicts on those grounds rather than for murders or atrocities directly linked to the individual accused.

Among those who were brought to late justice were Oskar Groening, an accountant at Auschwitz, and Reinhold Hanning, a former SS guard at the same camp.

Both were convicted of complicity in mass murder at the age of 94 but died before they could be imprisoned.

In the most recent verdict, a former SS guard, Bruno Dey, was found guilty at the age of 93 and was given a two-year suspended sentence.

As the court handed down Dey's verdict last July, he apologised to Holocaust victims, saying that "something like this must never happen again".

Dey worked in the same Stutthof camp, set up by the Nazis in 1939. They initially used it to detain Polish political prisoners.

Prosecutors are still examining another dozen cases against former Nazi or SS staff who worked at Buchenwald, Sachsenhausen, Neuengamme or Mauthausen camps, according to national broadcaster ARD.

A case was brought against another former guard at Stutthof in July over complicity in the murder of several hundred people.

In all, the Nazi regime exterminated six million Jews and hundreds of thousands of others in the Holocaust